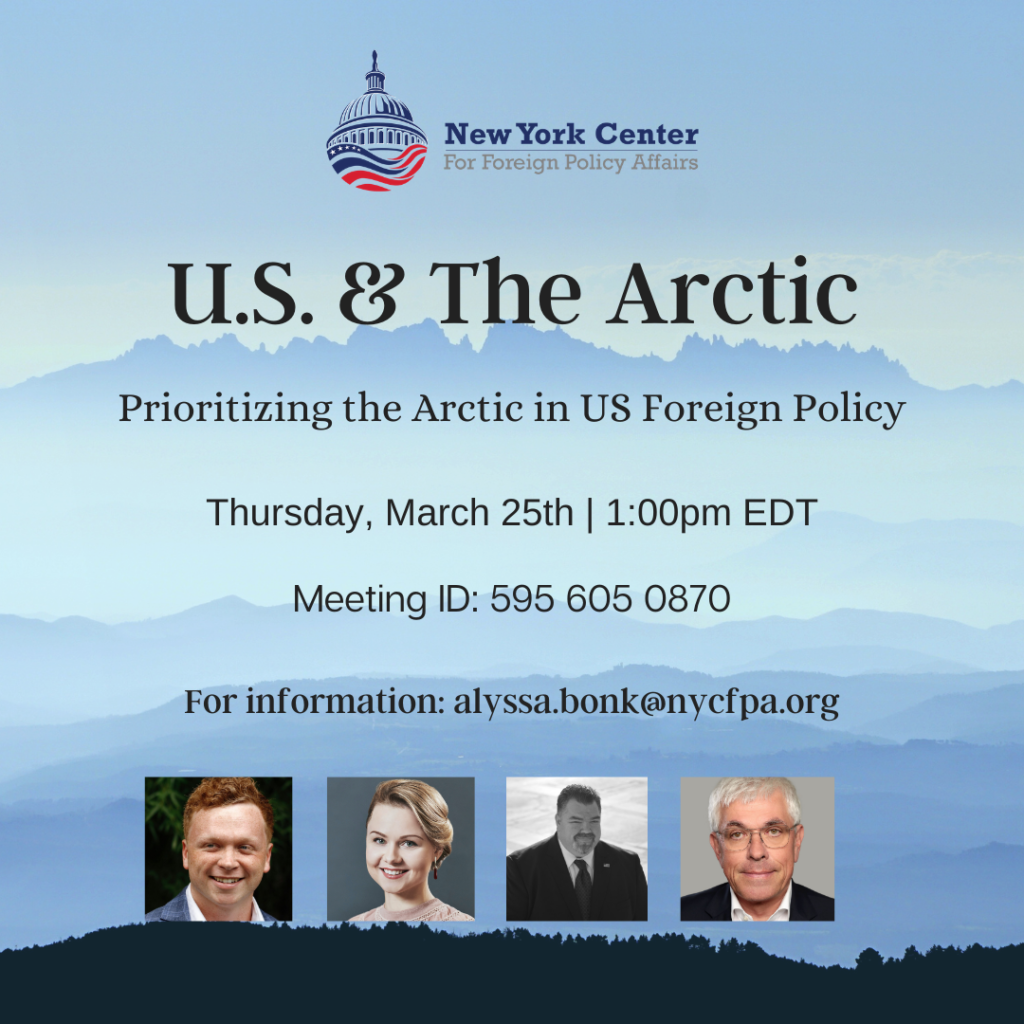 On Thursday, March 25th at 1pm the New York Center for Foreign Policy Affairs (NYCFPA) held a webinar via Zoom on US foreign policy regarding the Arctic region.  The panel was moderated by Principal Director, Justin Russell.  Expert panelists consisted of Agne Cepinskyte formerly of the Stiftung Wissenschaft und Politik (SWP) in Berlin, Michael Paul currently of Stiftung Wissenschaft und Politik (SWP) in Berlin, and Nick Solheim, Founder of the Wallace Institute for Arctic Security.

Justin Russell: We look at the Nordic nations (Norway, Sweden, Canada) is it correct to assume that because of its lack of focus, the US is a secondary player?

Nick Solheim: I would not say that is a fair or accurate representation of our stance.  Over the last 5-6 years we have seen an increase in interest from Department of Defense, but also the Department of Energy.  The State Department in particular was very concerned about China’s movements in the Arctic.  A lot of the inactivity lies within Congress.  There are high levels of power that are interested in the Arctic.  There are 20,000 people living in the American Arctic in Alaska.  The Chinese should probably be a little scared about everything that we’re going to be setting up.

Agne Cepinskyte: I completely agree with that and the US has expressed interest.  Just last week the US army released their own strategy for the Arctic.

Justin: Michael, Is that the opinion of our international partners? Is that the view of our NATO allies?

Paul: I guess, after four years of undermining its allies, the US needs to re-establish its international leadership role and the Arctic is an excellent opportunity.  It is a matter of time and priorities of the Biden foreign policy agenda.  We have to remember the Arctic has always been a neglected area of US foreign policy. Right now, domestic issues are much more important. We have to look at the meeting with China last week. In less than 100 days of his administration, President Biden got a taste of what the next four years will look like. A new era of bitter superpower competition. I just learned about the interim national security strategy to guidance paper and I was really surprised that the Biden administration has published something like that already.  The US is back at the table. But it will take time until the Arctic is on the table.

Michael: My feeling is that John Kerry will be one of the companions of Lincoln when they meet in Reykjavik in May.  And, when they are it will be a good idea to put climate change on the agenda because the US could be a clear leader on that. And everyone is interested in organizing climate responsible technology and green technologies.  It was already on the agenda of the Obama Administration.  It would be a good idea and to organize a ministerial meeting in May when Russia becomes chair of the Arctic Council to talk about climate change which was neglected by the Trump Administration.

Justin: Nick, do you agree?

Nick: Going back to the beginning of Michael’s point.  There’s been a lot of salacious media coverage about President Trump’s relationships with the leaders of those countries. To go back to the Trump administration – for all his faults – of which there are many, President Trump did direct agencies below him to take the Arctic seriously.  He was seriously interested in closing the ice breaker gap. He was the impetus to giving 12.1 billion dollars to ensure that their economy was stable against Chinese influence.  There were very smart and serious people who spent investment in the Arctic.  There’s still a lot of work to be done, but it’s too early to say that.

A number of other topics were covered including the relevance of the European Union, Russia, and China, among others.

The full discussion is available on the organization’s Facebook page. The next webinar will be on Thursday, April 1st at 1:30pm on the topic of the pragmatic relationship between Russia and China and its relation to US foreign policy.

PrevPreviousRussia Will Face a Hard Battle on Climate Change Issue
NextWebinar: Ideological Dilemma – How to Keep China and Russia AccountableNext