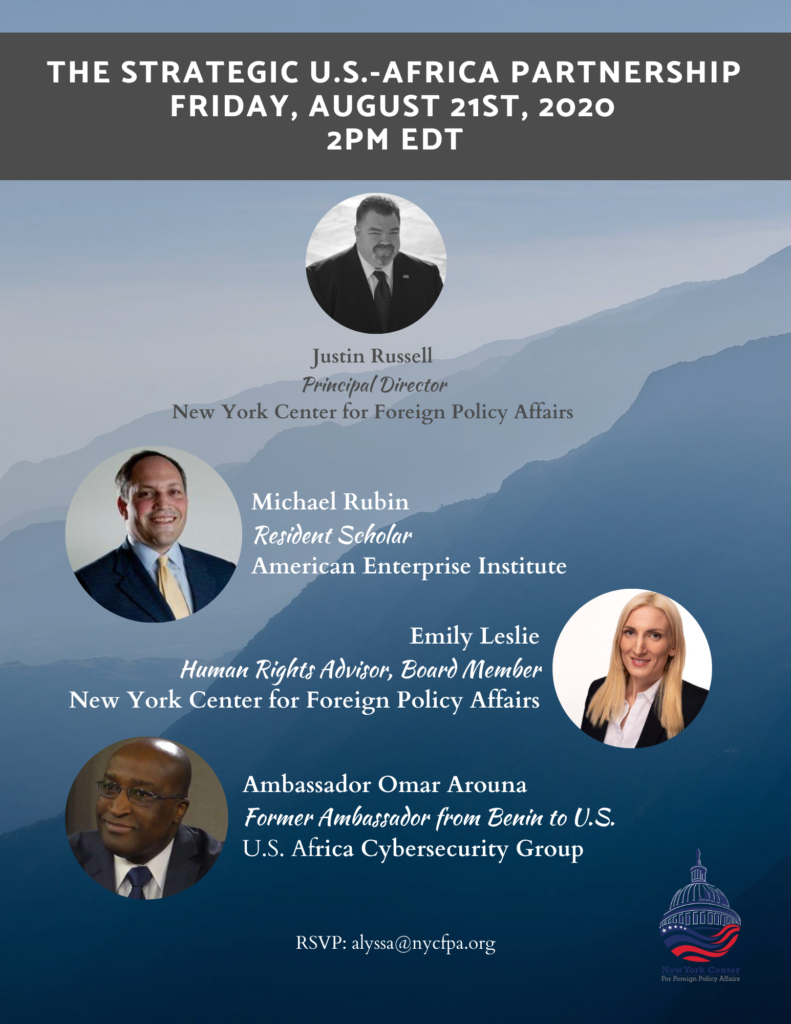 Principal Director Justin Russell commenced discussion with an overview of the importance of the relationship between the United States and Africa. In the view of the New York Center for Foreign Policy Affairs, the U.S.-Africa Partnership is critically important for economic development, national security, and global peace.

Michael Rubin of the American Enterprise Institute broke down the economic partnership between the U.S. and Africa. In his view, there is much to be optimistic about in Africa. More than a billion people have been lifted out of poverty in Africa over the past 20-30 years as many countries dump the old socialist economic model for capitalistic, and free market enterprise principles developing in the continent.  Even pointing to places such as Somalia there is room for hope. Though there are more troops in Africa than there are in Iraq making it hard to ignore the militaristic implications, at the same time a productive relationship cannot solely be through the military or through the camera lens of a drone. Rubin also pointed out that although Africa has always been a centerpiece for American policy and many Administrations declare lofty goals, what often happens is that Africa is forgotten depending on the Presidential Administration.  Meanwhile, Morocco, Turkey, Iran, Russia and China are all competing for influence in this region. In sum, he concluded that Africa is a continent on the verge of moving into a new era while the US is being left behind.

Emily Leslie then covered humanitarian efforts affecting the U.S.-Africa relations.   Emily began by addressing human rights violations in Sub-Saharan Africa specifically, failure to protect citizens from armed groups, huge crack downs on freedom of speech, and the increasing elimination of freedoms of the people.  Furthermore, use of religious ideology is used by extremist groups. Human rights are increasingly pushed to the side. They are now using the elimination of ethnic groups as a way to attack. Africa is looking at the United States’ handling of the events following the George Floyd protests and viewing these events as an example that the  U.S. is guilty of human rights violations as well.  African leadership does not believe that the military needs to be expanded, rather the US needs to come up with other ways to come up with investing politically and economically in the region.  In short, human rights funding is greatly overlooked with less than 1% of the US budget going towards humanitarian assistance.

Ambassador Omar Arouna continued the discussion offering his thoughts on the security and diplomatic aspects of US-Africa relations. The US cannot see Africa as an afterthought of its diplomatic engagement when it comes to a global state. The misconception by many Administrations is that Africa is not an interest, on the contrary it should be considered an interest for all Administrations no matter their party.  Furthermore, the US cannot be overlook the economic game when looking at Africa considering their wealth of natural resources.  If we do not engage on a national level with Africa we will not be able to have that access to those resources.  Lastly, the US diplomatic interest in Africa should be valued and protected.