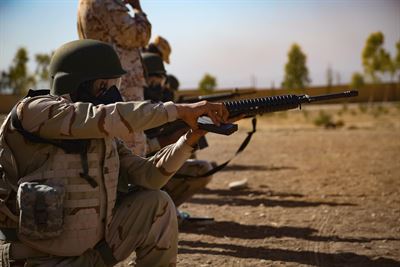 Washington DC – Monday– (08-06-2019) – New York Institute for foreign Policy Affairs (NYCFPA): The Islamic State terrorist group is resurging in Syria even as the United States withdrew troops, and is strengthening its insurgent capabilities in neighboring Iraq, a US Defense Department watchdog said today. This resurgence comes less than five months after President Donald Trump declared the terror group’s position there had been 100 percent defeated.

President Trump has repeatedly gloated his administration’s role in driving the terror group from areas under its territorial control. The President even told a Cabinet meeting last month, “We did a great job with the caliphate. We have 100% of caliphate, and we’re rapidly pulling out of Syria.” But the new report stated that the partial withdrawal of some US troops from Syria has already impacted the fight against the remnants of ISIS, making it harder to advise local allies on the ground. It also stops the US from being able to monitor areas that are described as potential recruiting zones that would allow the group to replenish its ranks.

The report, from the lead inspector general for Operation Inherent Resolve, the official name for the US-led operation fighting ISIS, covers the period April 1 to June 30, 2019. “The reduction of US forces has decreased the support available for Syrian partner forces at a time when their forces need more training and equipping to respond to the ISIS resurgence,” Glenn Fine, the principle deputy inspector general, wrote in a message accompanying the report.

The report warns that because of the reduction in personnel, the US and its local allies were unable to closely monitor the al-Hol internally displaced persons camp, a situation that has allowed “ISIS ideology to spread ‘uncontested’ in the camp,” potentially allowing ISIS to replenish its ranks among the tens of thousands of inhabitants.

At the height of the campaign in Syria, the US had approximately 3,000 troops helping to advice the US-backed Syrian Democratic Forces as they drove ISIS from towns all across the northeast Syria. However, even though the number of US troops has decreased substantially, the Pentagon officials have not provided official statistics on how many remain in the country.

Pentagon officials are worried that a potential Turkish military incursion targeting America’s Kurdish allies in northeast Syria could undermine the fight against ISIS. This operation has been reportedly proposed by senior officials in Turkey and the US has consistently called such a move “unacceptable,” expressing concerns that American personnel could be caught in the crossfire and that ISIS detainees could escape the chaos. ISIS continues to present a challenge in Iraq, where last month the US-led military coalition carries out 33 air or artillery strikes targeting ISIS fighters, buildings, tunnels, weapons caches and vehicles.