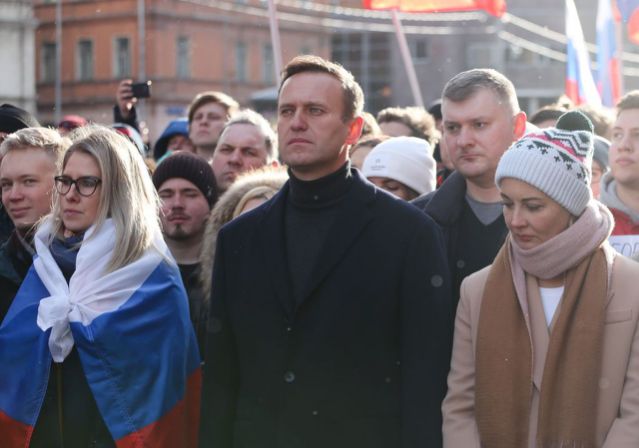 The poisoning and later detention of Russian opposition leader Alexey Navalny led to massive protests in his support, and could possibly lead to a political crisis in Russia and society’s disintegration. To be more specific, we are witnessing a conflict between two Russias – one with Putin at the head, and the other with Navalny as the leader. These two groups can’t find common ground, or try to listen to each other, and see a mutually preferable future for their Homeland.

On August 20, Russian opposition leader Alexei Navalny, the long-standing political opponent to Russian President Vladimir Putin, was urgently hospitalized after his plane made an emergency landing while en route from Siberia to Moscow. Later, he was flown to Germany for emergency medical treatment. The German government stated that the Russian opposition leader had been poisoned with a chemical weapon, Novichok.

While Russians argued who was responsible, the answer was straightforward in Navalny’s eyes. His trips to Russia’s regions (before his poisoning) had been dedicated to changing the alignment of political forces in Russia in favor of the opposition, and his possible death would benefit the ruling power. Moscow Carnegie Center contributor, Anastasia Dagaeva, wrote then on her Facebook page: “Novichok is like a black mark. They clearly want to squeeze Navalny out of Russia. His active trips to the regions are, perhaps, more dangerous than his participation in Moscow protests.”

After Navalny’s poisoning, many experts suggested that his destiny was now determined – as the leader of the opposition in exile, like many other Russian members of the resistance. This could be political suicide for him, but going back to Russia would be real suicide.

Despite the risks, Navalny returned to Russia and was promptly detained at a Moscow airport on January 17. The court sent the opposition leader to a pre-trial detention center for 30 days. Many governments and human rights groups worldwide declared Navalny a prisoner of conscience, and called for his immediate release and acquittal.

On March 1, Russian media reported that Navalny will serve his jail sentence in a penal settlement infamous for its harsh regime even by Russian standards.

Right after Navalny’s arrest in the airport, his team released an investigative report about the former service of the Russian President in East Germany, as well as about his friends, and about the President’s luxurious palace. The Kremlin denied the truthfulness of these reports, and state-owned TV channels said the reports were false and groundless. Nevertheless, these reports, together with Navalny’s arrest, convinced many Russians (mostly from the young generation) to protest in the streets.

On January 23, protests were held supporting Navalny, and the following day allies of the resistance declared new activities.  A couple of days later, activists Lyubov Sobol, Maria Alyokhina (Pussy Riot), and others were under house arrest. The Prosecutor General’s office cautioned people that an incitement for unapproved activities could be classified under Article 212 of the criminal code. Nevertheless, protests took place in 110 Russian cities and were, according to BBC experts, the largest uncoordinated protests in years.

The Russian Ministry of Internal Affairs in Moscow gave the lowest assessment of the protests: 4,000 people in Moscow. FBK director (Navalny’s team) Ivan Zhdanov estimates that around 50,000 people in Moscow and 300,000 across Russia took to the streets. Other experts estimated the number of protestors at around 18,000 to 30,000 just in the Russian capital.

For now, the protests have stopped. However, Navalny’s team promises more activity in the coming months and that the fight will continue.

By analysing Navalny’s case, we can quickly see what is really going on in Russian society. It is clear there are two irreconcilable groups. One is ready to turn a blind eye to the attempt on his life and arrest; but the other won’t put up with it.

This is seen in recent quantitative research. According to a Levada Center poll (Meduza published the results on December 24), the majority of Russian residents (78%) have heard about the poisoning of Alexey Navalny.

The authors of the study also asked those who had heard about the poisoning which version they consider the most plausible. As a result, 30% chose the answer claiming that “there was no poisoning; it was staged.” Another 19% sided with the option  that said “this is a provocation of Western special services”; while 15% of respondents thought “this is an attempt by the authorities to eliminate a political opponent.”

The versions that there was no assassination attempt, or that it was a provocation of Western secret services, are mostly embraced by those who have heard only something about the case, and they tend to support the Russian President and belong to the 40 to 54 year old age group, as well as older than 55 years. Meanwhile, those who closely follow the case, oppose the President’s activities, and belong to younger groups of Russians, and are more likely to believe that this was an attempt by the authorities to eliminate an opponent.

Russian lawyer, Sergei Badamshin, depicted the Russian protestors as “a new, fearless generation that has grown up.” It, “did not fall under the repressive machine and did not know the measures of responsibility for such actions, so it turned out,” the lawyer said to BBC.

Despite the propaganda pictures, not all of the protesters were from middle schools (the youngest protest’s detainee, according to the Russian officials, was nine years old). These were progressive people, students, and young professionals who receive information from all over the world, speak foreign languages, and have friends overseas. They want change, and don’t know another leader of Russia, except Putin.

Russian TV showed how they stayed on their knees in front of the police, gave them flowers, jumped in support for Ukraine, and embraced the Belarusian opposition. Interestingly, promotion for the protest was announced on social media, including Facebook and Tik Tok, which are the main channels for young people.

The part of the Russian community that mostly supports President Putin is usually a lot older. They are afraid of a return to the instability of Perestroika, and they still remember their cities under brutal mafia control. They think that the West betrayed them and, instead of inclusion in the European family they are instead depicted as a bogeyman. In this case, they are ready to forgive the current Russian government for everything, but not go back to the time when ordinary people were shot on the streets for nothing.

The compromise between these two Russia is practically impossible. For the older generation, Navalny is a traitor who works for Western intelligence with the only goal to eliminate Mother Russia from the world’s map and to gain access to Russian wealth and resources. Russian TV channels controlled by the government totally confirm this opinion and broadly promote this scenario.

NO SENSE TO TALK TO EACH OTHER

Simultaneously, the fact that Russian society has split in two after the scandal with Navalny can’t even be ignored by state-owned TV channels. For instance, the problem was recently acknowledged by Artyem Sheinin, the host of the political TV show, “Time Will Tell” (Vremya Pokajet).

However, he didn’t show a readiness to hear the other part of the political island, presenting the opposition as mislead people by foreign intelligence services, internet trolls, “animals” without any values, or children protesting on Russian streets despite their parents’ forbiddance. He said that he is not ready to give those people a public voice against all reasonable arguments from the other side.

American journalist, John Varoli (from 1997 to 2011 he was a foreign correspondent in Russia, first working for the New York Times, and then Bloomberg News, as well as contributing to many other publications) sees the dialogue between two Russias as a very problematic one. “I am often surprised by how intractable and uncompromising both sides are in this political struggle,” he said. On the one hand, “Russia’s ruling elite doesn’t want to share power at all with Navalny’s opposition group. They don’t want any independent challenge to their power, not the slightest challenge.” Navalny’s supporters are painted as traitors and western agents, rather being given even a few seats in Russia’s Duma. “And unfortunately, Navalny has foolishly played into their hands” by getting medical assistance in Germany – a key member of NATO, which calls Russia its No. 1 Enemy. “Navalny could easily have gone to Sweden or Switzerland for medical treatment,” Varoli says.

On the other hand, “Navalny’s opposition wants ‘Russia without Putin’, which is a rather pointless and empty slogan since the notion of ‘Putin’ is more than just one man — it’s a collective body of siloviki (Russian intelligence and military groups) that runs the country. If Putin goes, then another silovik will take his place.”

Varoli thinks that the majority of the population is still afraid that the country will “fall into the disarray and chaos we saw in the 1990s.” He reminds that was “the decade when liberals had the chance to rebuild Russia,” but failed. And it is, “not surprising that Russian liberalism has support from many young people who don’t remember the chaos of the 1990s.”

“Thus, the ruling siloviki only need to point to the chaos of the 1990s in order to discredit Russia’s liberal movement. Therefore, there will never be a strong liberal opposition in Russia,” he concluded.

Who will win in this ideological battle is unclear, and, of course, “time will tell.” However, according to the old Russian adage, “a bad peace is better than a good quarrel.” Maybe, instead of further confrontation, these two Russias need to sit at the negotiation table and try to listen to each other and find a middle ground of mutual respect and coexistence.