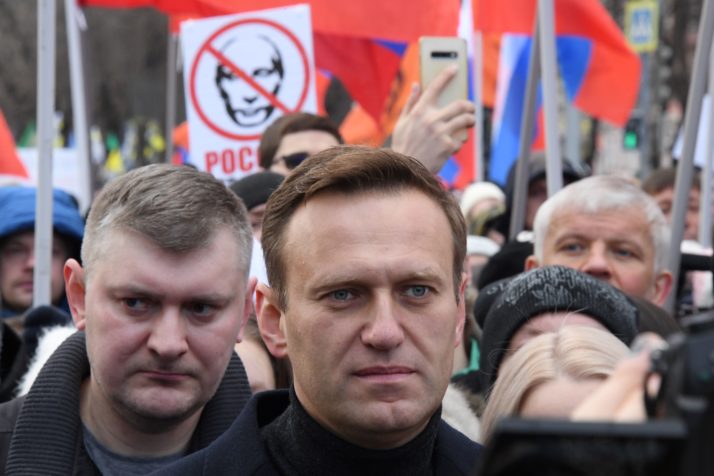 UPDATE: FBK recently called on Russian people to protest against lawlessness of authority on Apr 21st. “There are circumstances in which you need to act quickly, otherwise the irreparable will happen… We decided not to wait for the gathering of 500,000 people on our website… Wednesday, April 21, 19:00, the central squares of Russian cities,” they wrote on their Facebook page. According to media reports last night there were massive protests on the Russian streets again, and more than a thousand people are already detained. Time will tell what happens with the detainees and protestors. However, there are many suspicions that the Russian police will act more brutal than previously, and the Belarus scenario will be repeated in Russia.

While the world continues to fight the pandemic, Eastern Europe’s situation (in Russia and on the Russian-Ukrainian border) is becoming more and more disturbing. Russian opposition leader, Alexei Navalny, is suffering in a prison camp and “can die at any moment” while Russian intelligence continues a fight against Navalny’s team and the last independent press in the country.  Western countries, including the US have expelled dozens of Russian diplomats, and Russia is responding, accordingly. Furthermore, the concentration of Russian troops near the Ukraine border is now the highest since 2015. It may be we are witnessing a time when the bridges that were built by Gorbachev and Reagan are completely destroyed and a new iron curtain is ready to fall back.

THERE IS NOT A MOMENT TO LOSE

Very disturbing news is coming from Russia non-stop now. Imprisoned Russian opposition leader, Alexei Navalny, is in very bad condition and “can die at any moment,” said his doctor after reviewing recent blood test results. Due to acute renal failure, Navalny’s heart can stop at any moment. Navalny’s mother visited him recently and confirmed that her son is in very bad condition. The situation grows more complicated due to the Russian opposition leader’s ongoing hunger strike. Navalny’s only request is to allow the personal doctors he trusts to visit him and provide appropriate care (as a result of his near death experience in a Russian clinic after being poisoned a few months ago). His wife, Yulia Navalnaya, appealed to Putin to save her husband’s life for a second time. Though her first letter and public outcry from overseas and inside the country helped release Navalny from Russia, the Kremlin’s reaction to her second attempt has been cold, and many experts can’t exclude the possibility that the Russian authority intends to make sure Navalny rots in prison.

Recently, news of Navalny’s declining situation has transcended international political circles with many of the world’s leaders and celebrities pleading for Russian President Putin to give Navalny what he is asking for. For example, one of the petitions was signed by Joanne Rowling, Benedict Cumberbatch, David Duchovny and many others. Furthermore, dozens of Russian Orthodox Christians asked the Patriarch of Moscow and all Russia to intervene in the situation with their brother who is “worthy of compassion.” The White House made the statement as well by promising consequences if Navalny dies.

At the same time, the Russian government remains deaf to all the requests and continues to reject permission for Navalny’s doctors to visit him.  While the jailed Kremlin critic is deteriorating and beginning to lose sensation in his legs and hands (according to his lawyer), the Russian ruling power decided to send him a young Russian politician, Maria Butina, instead of sending him doctors. As a reminder, she spent six months in a US prison for violating US immigration law. US prosecutors insisted that while Butina was a student, she illegally worked in the US as a Russian foreign agent. For many months she rejected these accusations and complained about the appalling detention, including inadequate medical support and absence of sleep.  After six months in the US prison, Butina signed a deal with American prosecutors, plead guilty, and expressed her readiness to cooperate with the US Department of Justice. Almost immediately after being back in Russia, Butina became a member of the Russian Civic Chamber to defend Russian prisoners overseas. A couple of weeks ago, Butina visited Navalny as a Russia Today reporter against Navalny’s will; after an emotional squabble with the Kremlin opponent, she published on her social media page the opinion that Navalny doesn’t look ill and called on him to be a “man.” “If you’ve committed a crime, be punished with dignity,” she wrote. A couple of days later, other journalists, including CNN, tried to visit Navalny.  Of course, unsuccessfully. This group included representatives of the Alliance of Doctors, including Navalny’s doctors. Authorities temporarily detained this group, meaning that Russia used Navalny’s case for its own propaganda purposes regardless of his destiny or what the US or EU think.  Russian law enforcement is simultaneously continuing its crusade against the last free press and non-profit organizations. Recently, Russian police briefly detained and searched leading investigative journalists, one of the Pulitzer prize winners in 2017, Roman Anin, and prosecuted the student’s edition, DOXA. Moscow prosecutors also requested to recognize all of Navalny’s team, FBK, as an extremist organization. For many years, this organization was the main source of corruption exposures in Russia.

FBK recently called Russian people to go to protest against lawlessness of authority on Apr 21st. “There are circumstances in which you need to act quickly, otherwise the irreparable will happen… We decided not to wait for the gathering of 500,000 people on our website… Wednesday, April 21, 19:00, the central squares of Russian cities,” wrote on their Facebook page. However, there are many suspicions that the Russian police will act more brutally than previously, and the Belarus scenario will be repeated in Russia. Why is it so? The recent sanctions that were imposed on Russia by the US have not dramatically changed the Russian economy. Rather, Russia accepted the sanctions with a grain of salt. Furthermore, reciprocation in diplomatic relations between Russia and the US seem to be exhausted beginning with the almost “clumsy” call of Biden to Putin, expelling diplomats by both sides, Russia’s polite offer to US Ambassador John J. Sullivan to fly to Washington for consultation, and Russian Ambassador to the US Anatoly Antonov in Moscow. At the same time, these diplomatic efforts are urgently needed because the alliance of power in the region has changed dramatically and the situation is becoming more heated everyday.

Let’s look at Russia’s neighboring country, Belarus, where President Lukashenka’s regime celebrates its victory after pushing all the opposition members out of the country and violent suppression of protests. As we can infer, the Belarus opposition tactics have failed. The actions of Belarusian leadership didn’t meet an adequate response; Svetlana Tikhanovskaya, the West’s legitimate Belarusian President, will be a Belarusian leader in exile for a while, and Lukashenka has nothing to be afraid of anymore. In this case, Russia and Belarus grow closer to each other from an economic and a political standpoint. For example, the Russian intelligence operation that recently detained two people that were blamed for participation in their claimed US-backed assassination plot against Lukashenka. The Belarusian scenario shows that the West doesn’t have enough tools to change these regimes’ behavior – two leaders can continue to be playing chicken whether in their countries or the neighborhood without any severe consequences despite what they are being promised. Some view the weakness of Western diplomacy as the catalyst for Russian opposition leader, Alexei Navalny, to go back to Russia after time in Germany’s clinic and avoid the role of negotiator with Western countries. This is why the Russian government is not concerned by the West anymore to make decisions in Navalny’s case.

WAR OR NOT TO WAR

A couple of weeks ago, Deputy Prime Minister of Ukraine, Minister for Reintegration of the Temporarily Occupied Territories, Oleksiy Reznikov, said that Ukraine would no longer send its delegation to Minsk for negotiations within the framework of the Trilateral Contact Group for the Resolution of the Conflict in Donbas (TCG). According to his comments, “Belarus today is under the influence of Russia, and Kyiv does not have confidence in it.” It should be noted that this statement of Reznikov was made while relations between Ukraine and Russia are in the worst condition since 2014. Meanwhile, it is apparent that both sides don’t want to go to an actual war that will give Russia the status of an outcast country, and Ukraine may see more instability on its borders in this period of economic recession and pandemics.

Nevertheless, we can only infer that for now, Western diplomatic efforts have failed in the region, and not so many tools are available to leverage Russia’s behavior. All these cases, Navalny, Belarus, and Ukraine, signify that the international community needs to develop a new plan towards an increasingly bad situation in the region. The balance of power has changed, the sanctions tool hasn’t worked, and consolidative, innovative diplomatic efforts are urgently needed to give an adequate response to what is going on before it’s too late.

PrevPreviousSTATEMENT ON NYCFPA VS. U.S. DEPARTMENT OF STATE LAWSUIT AND U.S. GOVERNMENT APPROVAL OF SALE OF ARMS TO UAE
NextBahrain’s Social Media Problem: The Government’s Online to Real Life Attack on Human RightsNext