A Leader Against Her Will: Can Navalny’s Wife Be the Face of the Russian Resistance? 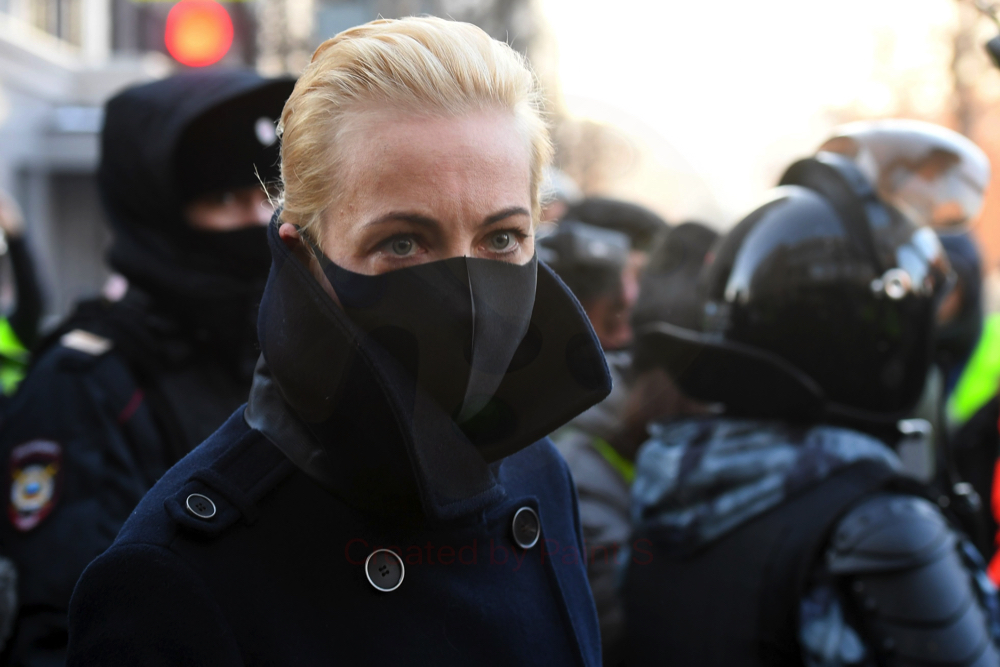 Russian opposition leader, Alexei Navalny, is suffering from bad health in a prison camp. On March 31st, he launched a hunger strike due to the absence of urgent medical care. His wife, Yulia Navalnaya, again appealed to Russia’s President Putin in an attempt to save her husband’s life.

Meanwhile, Yulia’s voice is stronger now; she receives a lot of support. Many experts see an analogy between the Russian and Belarus protests movement where Svetlana Tikhanovskaya took the fallen flag from her husband’s hand. In this context, maybe, we are witnessing the rise of a new Russian opposition leader who can rally support from many Russians who are tired of the arbitrariness of the authorities.

On March 25th, Navalnaya appealed to President Putin for a second time publishing an open letter on her Instagram.  She stated that her husband is suffering from bad health and an antagonistic attitude toward him in the Russian prison camp. She explained that despite the well-known consequences of his poisoning that happened half a year ago, the Russian authorities continue to mock him by not letting him sleep at night because of his supposed inclination to escape: “A healthy one will go crazy; what to say about a person who suffered a near fatal poisoning six months ago. Perhaps Alexei will need serious treatment…it is obvious to me that we cannot rely on the doctors in the FSIN (the federal authority for the detention of suspected and convicted persons – ed.)” Further, she demanded her husband receive appropriate medical care, and then personally turned to Vladimir Putin. “Putin has already told the whole country that he reads my appeals. So, I call to release my husband Alexei Navalny immediately. [The person] who he [Putin] unlawfully pressed into prison. Pushed because he [Putin] is afraid of political competition and wants to sit on the throne for the rest of his life,” she added.

Specifically, it was Yulia’s letter in August that saved Navalny’s life. After he was poisoned, Yulia turned to Putin with a demand to let her husband go to Germany for treatment. On the very same day, the leader of the Russian opposition was allowed to be transported there. However, the Kremlin’s reaction to a new letter was cold. President Putin’s spokesperson, Dmitry Peskov, only referred to the treatment of prisoners under the jurisdiction of the Federal Penitentiary Service.

Yulia’s latest appeal to Putin has been widely discussed in Russia. First, many experts can’t exclude the possibility that the Kremlin intends to make sure Navalny rots in prison. Secondly, Yulia Navalnaya’s emotional appeal to Putin may hint that she has no choice but to take a more active role in the fight for her husband and his values, exactly as it was with Svetlana Tikhanovskaya in Belarus.

A LOT IN COMMON

Last year, Svetlana Tikhanovskaya – President Alexandr Lukashenko’s opponent by her unexpected choice – became the Belarusian resistance’s face. She took the place of her husband who had been arrested as an opposing candidate to the President Lukashenka of Belarus. Now in the West’s eyes, after being pushed to leave Belarus by Lukashenka’s regime, she is seen as the legitimate Belarus opposition leader in exile.

In early 2021, when a wave of protests supporting Alexei Navalny swept Russia, Yulia Navalnaya didn’t go public. She refused to be interviewed and videotaped. However, both sides of the Russian political aisle often made analogies between Svetlana Tikhanovskaya and Yulia Navalnaya including the leader of the Russian Communist Party, Gennady Zyuganov. Zyuganov said that the West could repeat the Belarusian scenario by making the wife of Alexei Navalny, “the second Svetlana Tikhanovskaya.” Moreover, the Association of Entrepreneurs for the Development of Business Patriotism, “Avanti,” proposed to amend the Russian Federation’s legislation, which will not allow individuals, foreign agents, and their close relatives to participate in elections at all levels. They especially emphasized that this should be done with Yuliya Navalnaya, who poses a threat to Russian national interests, in their opinion, because they falsely accuse her of being a ‘foreign agent.’

In a letter that the president of the association, Rakhman Yansukov, sent to State Duma speakers and the Federation Council, he described his initiative as a desire to prevent Alexei Navalny’s wife from participating in the elections to the State Duma in 2021. (Yulia Navalnaya did not announce such plans). “Hilarious,” was her only response to this initiative.

Interestingly, Tikhanovskaya, in an interview for the Russian opposition TV Channel Rain, said that between her and Yulia, there is a lot in common. For example, “they both love their husbands.” She also didn’t exclude the possibility that Yulia will finally become the face of the Russian resistance. “In her fight for democratic values – why not?” said Tikhanovskaya. In response to the question of why Yulia doesn’t like the publicity, Belarus’ opposition leader commented: “There is probably a reason, but maybe it would change.”

The other analogy between Russian and Belarus’ protests is that women in both countries played a significant role. “The protests in Belarus and the protests in Russia were very close in timing and attitude. Women played an important role, so the first thing that comes to mind is to draw a parallel between the figures of Tikhanovskaya and Navalnaya,” says Lola Tagaeva, political-gender analyst, co-founder of Moscow MaleFest and FemFest. In her opinion, on the one hand, these protests were very similar. “Desperate women,” those who never took to the streets, started to do so. Simultaneously, Belarus’s activity was because male leaders could not participate in the political movement, and women decided to raise their flag and carry it further.

In Russia, the recent protests were more gender-oriented. They evolved from several demonstrations that didn’t have a significant political character. However, “many socially significant problems pass into the political plane, as it usually can be seen in political science,” Tagaeva explains, who added that all gender issues in Russia, at first, play out in the social arena and then reached the boiling point and began to enter the political level.

For example, there have been moments in Russia when people demanded a law to prevent domestic violence. Society was outraged after the Khachaturian sisters’ case; they were sentenced for the murder of their rapist father. He, for many years, abused them without concern due to the ignorance of local police. After that, the “March of Mothers” in support of two girls: 17-year old Anna Pavlikova and 19-year old Maria Dubovik, accused by authorities of extremism (“New Greatness” case). So, there were timid steps in society against arbitrariness, but there was no sharp political transition. Finally, on February 14, 2021, about 250 Russian women in Moscow joined the “chain of solidarity and love” in support of Yulia Navalnaya, and all those who suffered from the authorities’ lawlessness.

“Of course, when women gather and express their support for women political prisoners and victims of the arbitrariness of the authorities and say that this protest is politically tinged, and gender tinged. Definitely, this is an important story. It is an important step for the development of a women’s political movement,” Tagaeva says.

At the same time, she thinks that Lukashenka’s regime is fearless in its brutality. In the case of the Russian ruling power, it still cares about its electorate. “Women’s protests are quite dangerous for the Russian authorities because the female population in Russia is larger than men and have more political power; women are the main electorate. Besides, until recently, it was the most obedient electorate,” an expert adds.

Tagaeva says that, of course, women in Russia are represented in all government bodies. Still, there are very few of them, and it cannot be said that they are promoting a gender-sensitive agenda. Meanwhile, Russia has been turning in the same direction in recent months as Belarus; Russia’s regime is now becoming more Belarusian in style. This radicalization of ruling power, coupled with growing public anger, may result in a lot broader conflict.

BOX EQUALITY ONLY ON PAPER

Since November 1917, Soviet Russia granted women equal rights with men.  However, in many ways, those rights were only on paper, and inequality between women and men still exists. Tagaeva explains that in the Soviet Union, a woman received the right to vote, participated in political life, and study, but women were primarily seen as a labor force. However, no one relieved women of the responsibilities of caring for children and household work. In Russia, in general, women receive 70% of men’s salaries due to the attitude that a woman is not a full-fledged employee. She is someone who can potentially go on maternity leave. That is why poverty in Russia has a woman’s face. Russia has one of the highest divorce rates; custody of children goes to the mother in case of divorce. Meanwhile, Russian husbands are not very responsible, and the government doesn’t do a lot to make a difference. Today, overall alimony debt is more than 200 billion rubles ($14 billion). The women will eventually receive only about 10%. And this is not taking into account the history of physical and sexual violence against women in Russia, Tagaeva concluded.

Thus, Yulia not only has potential to be a new leader of the opposition, but she can also lead the movement for human and women’s rights, in particular, to be an example for the new generation of Russian women.  However, “it all depends very much on Yulia, whether she wants to do this. If so, she will have a very powerful position. It is clear that she evokes sympathy; she can become the face of the opposition – of course. Moreover, she has shown her leadership qualities many times.”

On the other hand, “Navalnaya faces a tough choice. “She has two children, and her husband is in prison – she has a stalemate.” If Yulia Navalnaya finally decides to go into politics, her approach will be different, Tagaeva thinks. “It will not be only as a negotiator with the West because she looked at what Tikhanovskaya was doing and saw that it did not work with the dictatorial regime. The position of the dictators is that the worse you do to us, the more we become bitter.” In this case, she regrets that Russia may be “following the path of a serious radicalized society. It is impossible to put pressure on society and not listen to it constantly.”

A member of the NYCFPA board of advisors, Dr. Rachael M. Rudolph, believes that to be successful, the Russian opposition group must be focused on the right strategy and learn from other country’s experiences, including why Belarusian activists failed. Speaking on how the U.S. can influence Navalny’s case, she advises to leave it, “to the international community rather than being adopted as a foreign policy agenda item for the Biden administration.”

“The U.S. traditional rights-based approach to the issues of concern in his case (e.g., detention, prisoner treatment, due process, etc.) and policymakers’ politicization of human rights are likely to cause greater harm than good for both him and other individuals detained under Russian law,” she reasoned.