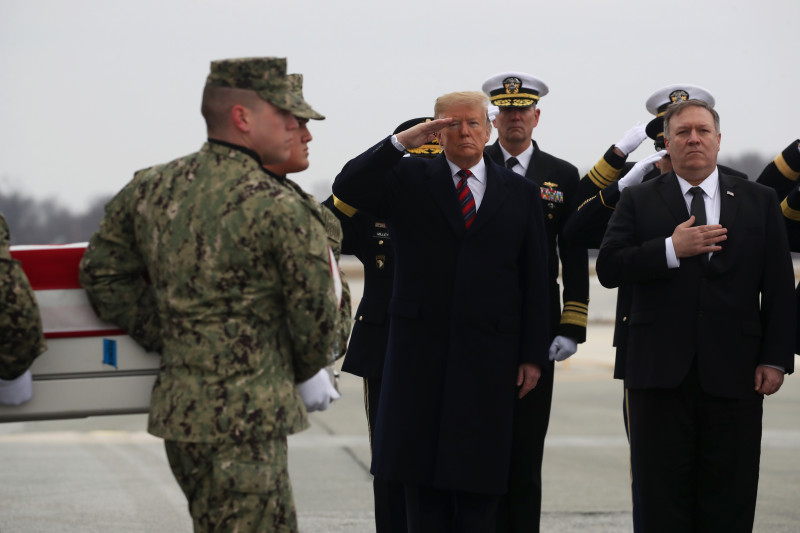 he Trump administration has repeatedly stressed that last week’s Middle East conference in Warsaw, Poland—officially dubbed the Ministerial to Promote a Future of Peace and Security in the Middle East—was merely an effort to demonstrate international solidarity and support for isolating Iran. But it sure felt like a war summit—a very familiar, and exceedingly ominous, war summit.

The meeting—which was attended by Vice President Mike Pence, Secretary of State Mike Pompeo, the Israeli prime minister, a smattering of Arab foreign ministers, Poland’s chief diplomat, and the British foreign secretary—coincided with the 40th anniversary of the Islamic Republic. U.S. National Security Advisor John Bolton marked that occasion by posting a video on Twitter outlining Washington’s long list of grievances and accusations leveled at Iranian leaders. Bolton concluded by addressing the supreme leader, Ayatollah Ali Khamenei, directly and declared: “I don’t think you’ll have too many more anniversaries.” Pence used the conference to aim harsh words at U.S. allies in Europe, whom he essentially accused of aiding and abetting an enemy of the United States.

Taken together—the Warsaw conference, Pence’s bullying of the Europeans, Bolton’s threatening video, and the broader background noise in Washington—the events of the past week were familiar in a foreboding way. The chatter about Iran has not become the war fever that gripped Washington in 2002 over Iraq, but the echoes of that year are not hard to miss in the Trump administration’s effort to shape the domestic and international debate about Iran. No one has made a reference to smoking guns and mushroom clouds, but how far off are we when the most senior U.S. officials have essentially declared their Iranian counterparts to be little more than a murderous gang hellbent on dominating the region? This was the same message that the George W. Bush administration stressed over and over again about Saddam Hussein and Iraq.

Pence could have spared himself the trip to Poland and sent Donald Rumsfeld in his stead to reprieve his infamous criticism of the Germans and French as “old Europe,” though, having learned their lesson in Iraq, the former defense secretary would now have to include the British. The entire sad conference was also reminiscent of the way in which the Bush administration scoured the four corners of the globe to build its coalition of the willing. Most ominously, there is a lot of whispering in Washington that the Trump administration is ignoring the professionals within U.S. intelligence community, Defense Department, and other foreign-policy bureaucracies who have judged Iran to be in compliance with the Joint Comprehensive Plan of Action (JCPOA).

None of this is to suggest that Iran is a benign actor in the Middle East (neither was Iraq). Tehran’s transgressions are well-known. Iranian leaders have enabled the killing of hundreds of thousands of Syrians, invested in the Houthi effort to bleed Saudi Arabia in Yemen, and threatened the stability of Bahrain. Then there is Hezbollah, which, according to the U.S. government, receives $700 million a year from Iran and has become an expeditionary force for Iran in Syria, Yemen, and reportedly Afghanistan. The Iranians have also repeatedly called for Israel’s destruction and provided support to groups such as Hamas and the Palestinian Islamic Jihad.

This is nasty stuff, but in the Trump administration’s efforts to build a case for war against Iran, it has purposefully overlooked two critical facts. First, even if Iranian leaders were, as the administration argues, intent on turning the region into a zone of Persian influence, they actually are not very good at it. Where they have been successful, they have taken advantage of the strategic blunders of others—the United States in Iraq, Saudi Arabia in Yemen, and Bashar al-Assad in Syria. On those occasions when they have directly posed a challenge to Israel, they have been hammered. Qassem Suleimani’s response to Israeli operations against Iran in Syria has been weak, underscoring how much the administration seems to be overstating the Iranian challenge.

Second, what Iran is doing is neither irrational nor a surprise. Tehran wants to keep Iraq weak and unstable so Baghdad can never become a threat to it again. It came to Assad’s rescue to preserve its connection with Hezbollah, the primary means through which it tries to influence (malignly) the Levant and challenge Israeli supremacy. It mucks about in Bahrain to keep the Saudis off balance. In other words, the Iranians are using the resources at their disposal to disrupt a U.S.-led regional order that disadvantages them in favor of the Saudis and the Israelis.

Of course, none of what the Iranians are doing around the region is OK, but are they causes for war and regime change? Iran has been up to no good around the Middle East for some time, yet the United States has remained the most powerful actor in the region, Israel is secure, and the oil still flows from the Gulf. It is true that Saudi Arabia has come under missile attack from Iran’s allies in Yemen, but that would likely stop when the Saudis end their military operations there. Former President Barack Obama tried to solve the Iran problem beginning with the JCPOA on the theory that coming to terms on Iran’s nuclear program would provide a pathway for a broader conversation. It has not worked out that way because the Iranians sought to press their advantage around the region and Trump—along with his advisors and the Republican Party—hated the deal from the beginning on the belief that the Iranian regime was irredeemable.

That may be true, but the smart policy in that case would have been to aim between Obama’s misplaced optimism and Trump’s bellicosity. In other words, to do what the United States, but mostly Israel, has long done to confront the Iranian challenge: deterrence. This is precisely what the Israelis are now doing in Syria. It is what the United States did in the spring of 1988 when Iran challenged U.S. primacy in the Gulf, resulting in a large portion of the Iranian navy on the seafloor. What is wrong with that? Deterrence does not require anyone to suspend reality and convince themselves that Iran can or wants to be a constructive regional actor. It is a tough-minded and realistic approach to a problem that presently does not require war. And deterrence is likely to garner more international support than what seems like a thinly veiled rush to conflict.

The one big difference between 2019 and 2002 is the determination among Democrats not to make the same mistakes they made 17 years ago when they allowed the Bush administration to frame the terms of the debate that paved the way for Operation Iraqi Freedom. Though many members of Congress are concerned about Iran, Democrats in particular are not going to support another preventive war in the Middle East. This might change if there is some type of provocation in the region, but at the moment, the Iranians do not seem willing to take that step. Still, the prospects of getting into a conflict with Iran seem greater than they were even six months ago. As hard-liners drive U.S. policy with bellicose rhetoric, the Trump administration is the wild card, not Iran.