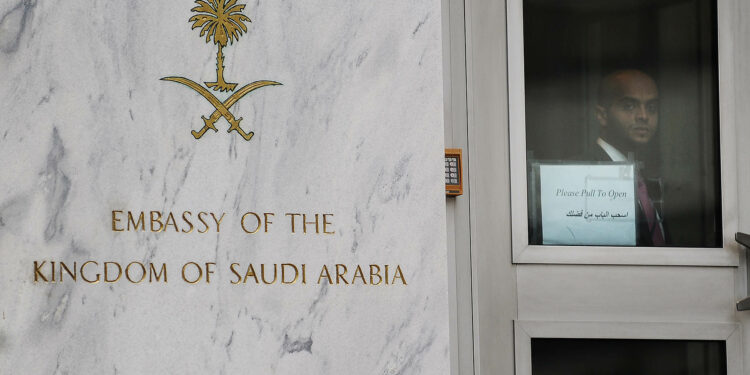 The renaming of the street in front of the Saudi embassy as Jamal Khashoggi Way respects the bravery and sacrifice of a man who stood up to the oppression of a terrible ruler and will remind the Saudi government every hour of every day that we hold it accountable for his heinous murder. Khashoggi was murdered on MBS’s instructions, but his message and goal of democratic transformation continue on via activists and dissidents inspired by his example and bravery.

Following the White House’s disturbing announcement that President Biden will travel to Saudi Arabia in July to meet with Crown Prince Mohamed bin Salman (MBS), NYCFPA reiterate our calls on the Biden administration to keep its promises to hold the Saudi government accountable for the murder and to end weapons sales to the country, as well as to defend Saudi political activists at home and abroad who continue to face repression and attacks from the Saudi government.

According to the Report of the United Nations Special Rapporteur on the Murder of Jamal Khashoggi, Saudi government agents acting on MBS’s orders kidnapped, tortured, and killed Khashoggi on October 2, 2018, after Prince Khalid bin Salman, Saudi Vice Minister of Defense and former Saudi ambassador to the United States, duped him into going there.

MBS sought to silence a leading advocate of reform. The designation of Jamal Khashoggi Way satisfies one of the Special Rapporteur report’s recommendations to create a tribute to Mr. Khashoggi’s stand for press freedom in front of the Saudi Consulate.

The Biden administration, for its part, released an ODNI assessment confirming MBS’s direct complicity in the murder and sanctioned 76 Saudi officials under its newly minted “Khashoggi Ban” sanctions for extraterritorial assaults on dissidents, but stopped short of penalizing MBS personally.

Despite then-candidate President Biden’s campaign promises to hold the killers of Jamal Khashoggi accountable and make the Saudi government “pay the price, and make them in fact the pariah that they are,” and its early, tentative steps to hold the Saudi government accountable, the Biden Administration has announced its intention to reverse course, restoring arms sales to Saudi Arabia and revealing plans to enter into a defense agreement with Saudi Arabia.

Since Khashoggi’s death, the Crown Prince has proceeded to torture, murder, and disappear political activists and anybody else he considers to be a danger to his authority, no matter how implausible. The list of political detainees continues to expand, including Salem Almuzaini, Prince Salman (Ghazalan) Al Saud, Salman Alodah, Waleed Sami Abulkhair, and Omar and Sarah Aljabri.

The Crown Prince has also carried out mass killings. The Saudi authorities executed 81 people in mass executions in March 2022, following false trials. Thousands of Saudi residents are still subject to arbitrary travel bans, unable to leave the country, as MBS attempts to consolidate his control by holding individuals who could question his reign prisoners within the kingdom.

We also urge the Biden administration to strengthen its protection of Saudi political exiles who face harassment and surveillance in the United States, including by monitoring and publicly reporting on such activities, providing security to affected individuals, and imposing additional sanctions on culpable Saudi officials.

PrevPreviousNYCFPA’s statement on Biden’s visit to KSA.
NextNYCFPA statement regarding the release of US lawyer Held in UAE.Next