WEBINAR // US – Africa: The Emerging Threat of ISIL 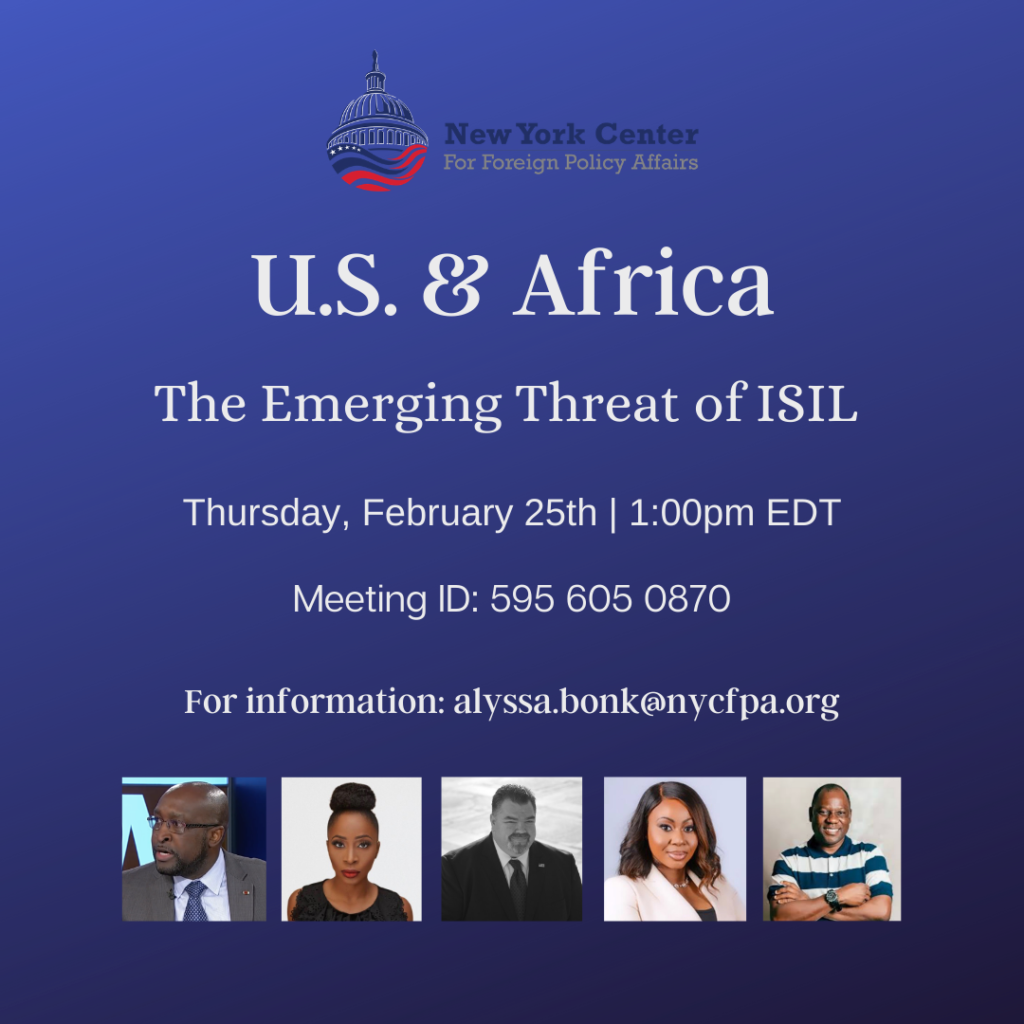 Join us next Thursday, February 25th for this expert line-up covering the many facets of the emerging threat of #ISIL in #Africa!

Event will be available on #Zoom, as well as streamed through #FacebookLive!

Michael is an associate of the Africa Center for Strategic Studies – National Defense University Washington DC. Michael has worked extensively on projects related to peacebuilding and good governance in Nigeria. He is a Co-Founder and Project Coordinator of Peace Initiative Network (PIN), a NGO that focuses on peacebuilding, good governance, and development in Nigeria.

Dr. Olajumoke (Jumo) Ayandele is a Research Consultant at The Armed Conflict Location & Event Data Project (ACLED) and an incoming non-resident fellow at New York University Center for Global Affairs. Her research interests broadly focus on understanding the dynamic relationship and intersection between African conflict, human development, and political stability. She holds a Ph.D. in Global Affairs from Rutgers – The State University of New Jersey, an M.P.A. in International Development Policy and Management and a B.A. in Economics, both from New York University.

Ambassador Arouna Is the former Ambassador of the Republic of Benin to the United States, Mexico and the former Representative of the country to the World Bank, the International Monetary Fund and the Organization of American States. He is currently The Managing Partner of US-Africa Cybersecurity Group and the CEO of Global Specialty LLC.

He serves as the Vice President on the Advisory Board of the New York Center for Foreign Policy Affairs (NYCFPA).

Ms. Johanna Leblanc is a Haitian-American national security law and foreign policy expert.  Ms. Leblanc serves as the Senior Advisor to both Haiti’s Ambassador to the United States and the Ministry of Foreign Affairs. Her portfolio includes, but not limited to, promoting the interests of the state before the United States Congress, White House, and other institutions, and advising the government on intergovernmental relations, immigration, national security, and trade.

In 2017, Ms. Leblanc was appointed to the Commission of African Affairs as a Commissioner by D.C. Mayor Bowser. She was subsequently appointed as the vice-chair of the commission. She advised the administration on how to address issues impacting the African Diaspora through public policy and testified at hearings. Ms. Leblanc currently serves as an Executive Board member of The African Diaspora Development Institute (The ADDI), where she was appointed by the Former African Union Ambassador to the United States.

PrevPreviousMESSAGE TRAFFIC: A Conversation with Gregory D. Johnsen
NextCURRENT STATE OF AFFAIRS IN BENIN: THE BACKSLIDING OF DEMOCRACY AND THE DECONSTRUCTION OF DEMOCRATIC INSTITUTIONSNext