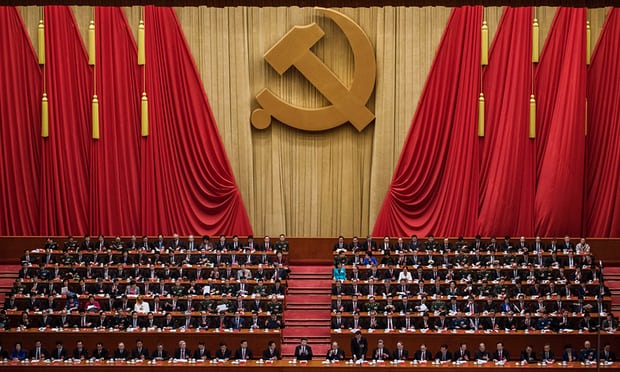 Ben Doherty – Guardian – The Australian academic Clive Hamilton has told a US congressional committee China is waging a “campaign of psychological warfare” against Australia, as America’s most significant ally in the region, undermining democracy and cowing free speech.

Hamilton, vice-chancellor’s chair in public ethics at Charles Sturt University, is the author of Silent Invasion: China’s Influence in Australia, a book which was dumped by Allen & Unwin last year over fears of legal action by Beijing, before being published by Hardie Grant.

Hamilton appeared before the Congressional-Executive Commission on China, chaired by US senator for Florida Marco Rubio overnight Australia time, in Washington DC.

He said Australia was currently being subjected to a Chinese Communist party-sponsored campaign of “subversion, cyber intrusions, and harassment on the high seas”.

“Beijing knows that it cannot bully the United States – in the current environment the consequences would be unpredictable and probably counterproductive – so it is instead pressuring its allies,” Hamilton said.

“Last week the PLA Navy challenged three Australian warships sailing through the South China Sea, simply for being there. It has scaled up its threats of economic harm unless Australia changes its ‘anti-China’ path. This psychological warfare is only stage one, with real punishment to follow if needed.”

Hamilton told the committee that, since the publication of his book in February, he has had to go to “extensive measures” to secure his personal safety: suspected Chinese operatives, carrying a suspected “sniffer” phone to intercept communications, have been caught loitering outside and trying to get into his office; Chinese students have been confronted going through his unmarked pigeon hole; and his computers have been infected with malware. Now, when he speaks at public event Hamilton is provided security guards.

Silent Invasion was about to be sent for typesetting by Allen & Unwin when it withdrew from publication in November last year citing “potential threats to the book and the company from possible action by Beijing”. In the wake of its dumping, other major publishers steered clear.

“Allen & Unwin’s decision to drop Silent Invasion citing fear of reprisals from Beijing was a spectacular vindication of the argument of the book,” Hamilton said. “No actual threats were made to the publisher, which in a way is more disturbing. The shadow cast by Beijing over Australia is now dark enough to frighten a respected publisher out of published a book critical of the Chinese Communist party.”

Hamilton said the withdrawal of the book had had a chilling effect on free discussion of China and its geopolitical influence, and that he had been told by China scholars they censored themselves in order not to jeopardise their visas to China for research, and so protect their careers.

Upon publication, China’s ministry of foreign affairs condemned the book as “slander” and “good for nothing”. The Chinese embassy in Canberra called the book “disinformation and racist bigotry” carrying a “malicious anti-China mentality”.

The book also divided China scholars. An open letter signed by more than 50 academics said there was no evidence China was seeking to export its style of government, and that the tone of the China debate in Australia was “dissuading Chinese Australians from contributing to public debate for fear of being associated with such a conspiracy”. A counter-letter, signed by more than 40 academics, argued that: “Some of the CCP’s activities constitute unacceptable interference in Australian society and politics”.

“We strongly believe that an open debate on the activities of the Chinese Communist party in this country is essential to intellectual freedom, democratic rights and national security.”

After Allen & Unwin pulled out, Hamilton’s cause won wide support in the media and in public debate. Several parliamentarians suggested publishing the book in Hansard, as a demonstration of Australia’s commitment to free speech, while offering Hamilton the protection of parliamentary privilege.

But Hamilton said in the furore over his stalled work, Australia’s universities were silent, which he claims was as a result of concern that a show of support could jeopardise their lucrative flow of Chinese international students.

“It is no exaggeration to say that Australian universities now tiptoe over eggshells to avoid any action that may offend party bosses in China,” he told the committee.

“Australian universities are now so closely tied into monetary flows and links with China that they have forgotten the founding principles of the western university.”

After Allen & Unwin pulled out, two independent publishers expressed an interest in picking up the book, before also pulling out. One of those was Melbourne University Press, whose board overruled the chief executive on publishing the book.

“Sources close to MUP have told me that a factor in the board’s decision was the anxiety of senior university executives about the potential impact of publication on the university’s lucrative revenue flows from Chinese students.”

Hamilton commended the “courage and commitment to free speech of Sandy Grant, the principal of Hardie Grant” for taking the book on.

In 1986, Grant was a publisher at Heinemann, which defied the UK government in publishing Peter Wright’s expose of MI5 and MI6, Spycatcher. In a high-profile court case over the book’s publication in Australia, Wright was represented by Malcolm Turnbull, now Australian prime minister.

Had Silent Invasion never been published, Hamilton said, it would have represented a comprehensive victory for the CCP.

Hamilton told the committee many people in Australia were concerned about China’s growing – and undisclosed – influence in the country.

“Many Australians have had an intimation that something is wrong … the scale and nature of the threat is one lay people need to understand.”

The Congressional-Executive Commission on China is an independent agency of the US government, established by Congress in 2000 to monitor human rights and rule of law developments in China.