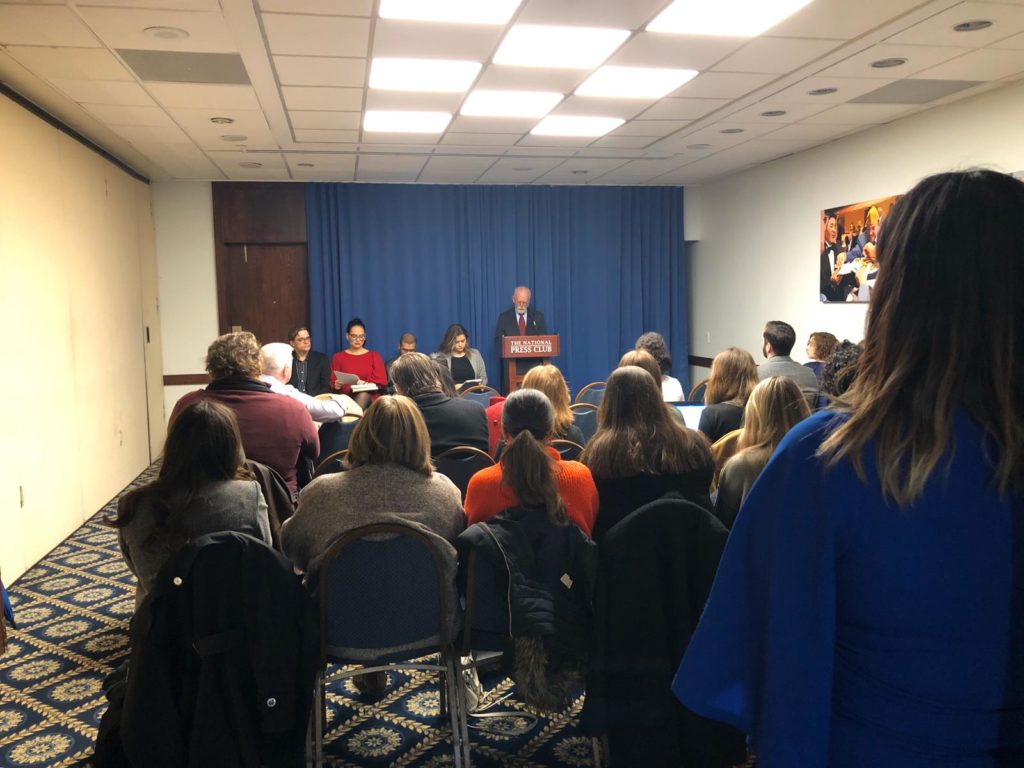 The program began with Steven Schneebaum’s review of several key points to consider surrounding Lebanese geo-political history. First, Lebanon has been forced by reasons of geography to absorb literally millions of Syrians fleeing their homes, and posing not only a massive humanitarian crisis, but also an economic one, both of which threaten the country’s stability. Second, Lebanon’s government is dominated by Hezbollah, considered a terrorist organization by the United States and the European Union, among others, and thought by many to be a front for the expansionist Iranian regime. Its role as a beachhead for the Iranian theocracy raises serious concerns about Lebanon as an instigator, and not just a victim, of organized international terrorism. Third, Lebanon borders Israel to the north, and that troubled frontier always poses threats to the security of America’s most prominent ally in the Middle East.

Kinana Alshareef commenced the panel from a Syrian perspective, providing a compare and contrast of the Lebanese revolution with Syria’s own protests years before. Ms. Alshareef explained that although Hezbollah has attempted to suppress recent demonstrations the Lebanese protestors have refused to go home. Expanding on this point, she pointed out the strain this has had on Hezbollah’s resources. With this being said she concluded that the situation in Lebanon is critical and the best solution for the area. If Hezbollah loses it will create a significant loss for them.

Saif Almuthana provided a Yemenese perspective on the situation in Lebanon in contrast with the rest of the region, specifically Yemen, Syria and Iraq. He provided his segment in Arabic.

Jeff Casey expanded on the the regional impact and implications of the Lebanese uprising in relation to Iran. Can tragedy in Lebanon turn into harmony? That may be too much to expect in the short term, but stability is worth pursuing and achievable in collaboration with the international community. One of the more positive sides of this situation is the growing role of social media and its impact for protestors who have begun to use these tools to protest, get the word out, shed light on dark places and to gather and share information. Iran is a big force here via Hezbollah. They are spending money on and pushing actively extremely violent crackdowns, and it is starting to backfire now. This is a continuation of the Arab Spring, and will continue until a solution is found.

Lastly, Bassima Alghussein provided a general overview, strategic U.S. interests, and the potential outlook going forward. She began with a brief history of the geo-political structure of Lebanon. As for strategic U.S. interests, Alghussein identified three: 1) counter-Iranian influence 2) help to mitigate or contain the Syrian refugee crisis, and 3) protect Israel. Whereas the United States has provided 1.7 billion dollars primarily for security assistance to support the Lebanese Armed Forces (LAF) to counter Iranian influence/Hezbollah, the Trump Administration recently blocked 105 million dollars of previously allocated funds. In moving forward, one interest should be to make sure Lebanon is not a failed state. Furthermore, the U.S. should consider how it wants to support Lebanon with financial assistance whether its more, less, or restricted. Lastly, the recent uprising does not seem to be a sectarian crisis in terms of demands, but moreso a united voice about basic human needs – water, electricity. With this being said, the United States should see opportunity here when deciding on its involvement and policy moving forward.

The discussion concluded with a number of questions and answers lead by moderator, Steven M. Schneebaum.