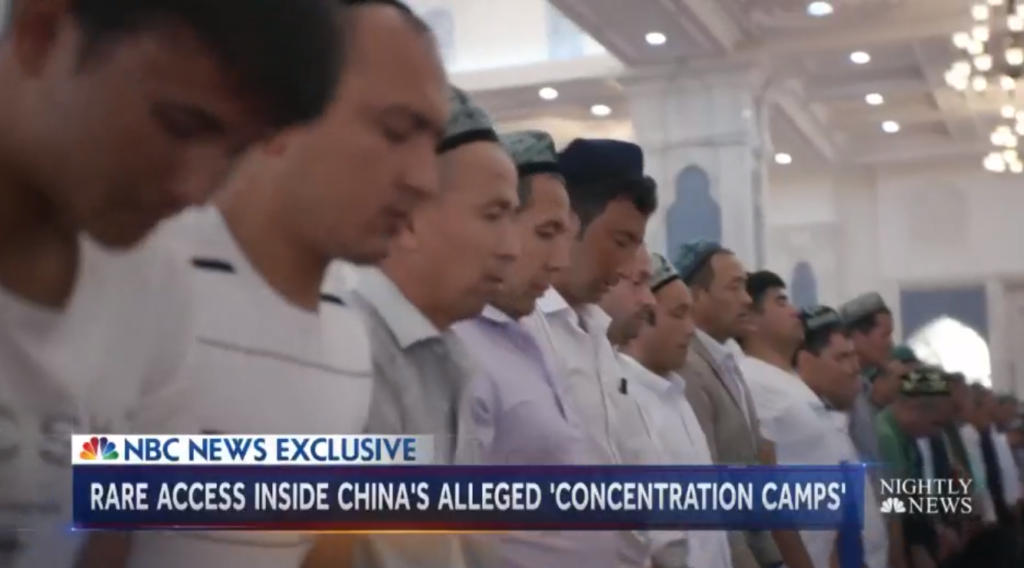 Some describe this resettlement, combined with the concentration camps is a slow-motion ethnic cleansing of the region.

This spring, the United States accused China of putting ethnic minorities in “concentration camps.”  China call them “reeducation and vocational training centers” but the ethnic minority Uighurs who have escaped describe horrific conditions in the camps.

But according to reports from Reuters, reported in Haaretz, the Chinese are putting Muslim Uighur minority and other Muslim Turkic groups in Xinjiang into the camps to make them more “Chinese.”  The camps are buildings surrounded by razor wire with cameras in every room, monitoring the inmates.

Numbers of people in the concentration camps are estimated at 1.5 million, although estimates go as high as 3 million.  The camps were created following a period of unrest 10 years ago, which included bombings, shootings and knife attacks.  The Chinese responded by initiating a counterinsurgency and pacification program, according to Human Events.

The Chinese maintain a heavy military presence in the region and have set up extensive monitoring and surveillance systems that include facial recognition and tracking devices in cell phones that keep track of residents.  Thought police, as they are called constantly monitor Uighurs to see what they do and who they talk with, even whether they pray. And often, people just disappear, never to be seen again by family or friends.

As part of a pacification program, China also has created a resettlement initiative that encourages Han Chinese to settle in Xinjiang, replacing the Uighur population, which has dropped to 40 percent from 90 percent in recent years.  Some describe this resettlement, combined with the concentration camps is a slow-motion ethnic cleansing of the region.

All of this is happening with a backdrop of the massive, hemispheric, Chinese economic development and expansion program known as China Belt and Road Initiative.  That program extends from China to the Middle East, Europe and Africa.  Xinjiang is a strategic crossroad of that program and China will not abide unrest as construction cranes and crews build the infrastructure needed to continue the project.

China wants to suppress insurgency from a nascent independence movement and to address the region’s poverty by requiring income from the Belt and Road Initiative development to be reinvested in the Xinjiang region.  Coastal wealth means nothing to impoverished residents of the region on the border of Kazakhstan, a seven-hour flight from Beijing, bordering Central Asian nations and former Soviet satellite countries.

A map of the Belt and Road Initiative shows that Xinjiang stands at a critical crossroad of rail, gas and oil pipelines, which are essential to the master plan of the development.  In the so-called “Dry Port” in nearby Khorgos “Eastern Gate” in Kazakhstan, construction is ongoing in the province and security is tight, which raises tensions in the community.  Is the ethnic cleansing crucial to the economic development?  It would appear China believes it is. That, however, does not explain the harshness.

Roundups of Uyghurs and other Moslems began in 2014.  In the concentration camps, according to firsthand accounts reported recently in Reuters, inmates are beaten, raped, fed weak rice soup and small pieces of bread.  They are held more than 20 to a room with a bucket for a toilet, always on camera.  Suicide is not uncommon.  Much of the day is spent confessing “sins” and learning Chinese and nationalist songs.  Public rape of women has been reported, forcing other inmates to watch.  Those who turn away are punished.  Practicing Islam is prohibited and possessing a Koran is punished harshly.

The stated goal is to make the Uighurs and other inmates more Chinese but if that is the case, it raises the question of what does it mean to be Chinese.  Surely the Chinese people do not behave this way.  China has always had a sketchy human rights record, however, this goes beyond the pale.

Where is the United States and the UN?  The USA has its own human rights crisis currently unfolding on its southern border. The US Secretary of State has warned China about the abuses in Xinjiang and the U.S. State Department announced, on Oct. 9, it would ban certain Chinese officials and their immediate family members from obtaining U.S. visas, citing their ties to human rights violations in Xinjiang.

In July, “22 (nation) states called China to task for its horrific treatment of Muslims in Xinjiang,” said John Fisher, Geneva director at Human Rights Watch. They urged China “to allow meaningful access to Xinjiang” for UN and independent international observers, and asked the high commissioner to keep the Human Rights Council (HRC) regularly informed on the situation.

These developments call into question whether Belt and Road can succeed despite or because of the human rights abuses in Xinjiang.  In Pakistan, for example, according to Amnesty International, a crackdown on individual liberties has coincided with the promise of tens of billions of dollars in investment from China.  Criticism of the government is among the violations of the Prevention of Electronic Crimes Act of 2016, which has resulted in the crackdown of online dissent in Pakistan.  Similar developments have been seen in other countries with close economic ties to China, including the Maldives, according to The Diplomat.

Suppression of labor organizing is another side effect of the Belt and Road Initiative in China that has been documented in Human Rights Watch and Amnesty International.  Aside from the criticism of using Chinese labor over local workers in host countries and the complex compensation system, out of an estimated 1,700 infrastructure projects associate with the development, we could find none that have been union organized.  In fact, in many instances, credible allegations of forced labor of Chinese migrant workers has been made.

It would seem that the $1 trillion, massive Belt and Road Initiative is having a negative effect on human rights, not only in China but in those nations that have signed on to participate in the initiative.  It is admirable as an effort to build an economically viable transportation infrastructure but it must not be allowed to do that at the expense of the very people it is intended to benefit.

By James Grandone, NYCFPA Senior Advisor. James is a citizen of the United States and has been involved in strategic marketing and public relations on a national and international level for more than 30 years. His involvement with the international community, generally, and the Middle East, in particular, extends back to university days. He holds a B.A. in Political Science and is a former Fellow with the Coro Leadership Center in Public Affairs.