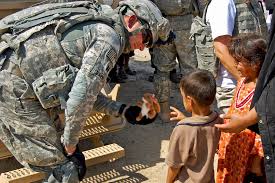 In December 1948, The United Nations’ Universal Declaration of Human Rights was voted on by the majority of the UN General Assembly. It was rooted in President Franklin D. Roosevelt’s “Four Freedoms” – freedom of religion, freedom from want, freedom from fear, and freedom of speech and expression. The document asserted that respect for and the advancement of human rights were necessary in creating a more peaceful and stable society for all. The Universal Declaration, the gold standard for international human rights, has been built into the constitutions of numerous countries and has inspired numerous agreements, which now have the power of international law.

Humanitarian action has always been an important part of the political arena. In fact, what is the point of politics other than making the world a better place? Humanitarian aid is necessary to human welfare on a global scale. However, what is often not discussed is how it can be one of the greatest ways of spreading influence and diplomatic power.

Every nation has different ambitions and every country has several attributes, but one of a nation’s primary goals is to make sure their interests and influences are seen on a worldwide scale. Foreign policy consists of cultural, military, economic initiatives. Over the last decade, human rights groups have documented a decline in freedom around the world. In select countries, such as Egypt and Venezuela, for example, selected leaders use democracy to get into power and then abused that power. In others, such as Russia, autocrats have acted more aggressively towards their adversaries. Therefore, it is becoming more and more important for the United States to weigh the importance of promoting a powerful human rights agenda, and finding what tools are the most effective in doing so.

Often the best and most effective strategy in deploying a healthy human rights campaign through foreign policy is through foreign aid. In fact, a successful foreign policy entails a focus on areas of global finance, trade, humanitarian foreign aid. Foreign aid is a powerful foreign policy tool in America’s non-combative armor. Essentially, nations gain a heads up in foreign policy by using foreign aid as a way of creating a friending partnership or by withdrawing aid from a country. Countries receiving the aid are given an incentive to adjust their behavior or risk termination of aid. This is an effective strategy in maintaining control over rogue nation-states who depend on foreign aid. By helping other nations, countries can win favor and strengthen diplomatic ties without the threat of war.

However, despite the critics’ feedback, investments in foreign aid enhance the recipient of country’s wellbeing while ensuring greater stability and security. Meanwhile, it creates more partnerships and stronger allies for the United States. Foreign aid is more than just a strategy for economic development of poor, destabilized countries. When these countries are relieved of extreme poverty, they enter the political sphere in a greater, more development standing. Therefore, citizens will be less likely to join revel groups or fundamentalist groups.

A 2018 study entitled “Has development assistance for health facilitated the rise of more peaceful societies in sub-Saharan Africa?” found that countries in the region have shown increased stability as a result of American aid. The studies’ results ranged from the years between 2005 and 2014, where a plan from the executive branch titled the President’s Emergency Plan for AIDS relief, and other global health programs, were given increases in funding. The report analysis found that countries that received the highest levels of health aid per capita had improved nation-state stability metrics. This ensures a higher governing quality, less corruption, and a greater civil society. This was especially important to many of the countries that were also strongly destabilized because of HIV outbreaks and other disease impacted living conditions.

The findings also found that low-income nations that faced increasingly high health challenges and received support for their health systems found immediate results in state stability metrics. “Seventeen nations (36.2%) exhibited an overall decline in their FSI over the duration of the study period, indicating greater stability,” the study states. Not only did the aid literally save lives, it also helped generate more peaceful and governable societies.

The United States foreign assistance budget only compromises 1 percent of the entire federal budget. Many global threats such as mass epidemics and terrorism grow from the seeds of instability and corrupt governance. Working towards counteracting these problems does not just save lives today, but it helps create a more prosperous future.

Businessman Bill Gates, Microsoft co-founder recognized the importance of humanitarian aid. In a post by him, titled “Giving foreign aid helps America’s economy,” he asserted that previous U.S. foreign aid intervention helped lead the way for a number of countries to become economic powerhouses and subsequently helped the United States businesses. He said: “Just a few decades before we opened our Tokyo office, Japan had been devastated by World War II. Its economy and infrastructure lay in ruins. How did they recover? Among other things, through smart aid programs from the United States and others. By the 1980s Japan’s economy was booming, and the country presented a great opportunity for companies like us. To this day, sales there are a key part of Microsoft’s success and these sales have produced many jobs in Japan and America alike.”

We are in a time where millions of people are escaping from their unsafe homes and are fleeing from famine and civil wars. Humanitarian aid is needed now more than ever. Despite several instances of backlash, setbacks, and misguidance, human rights are a cornerstone of the U.S. foreign policy.