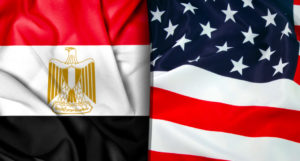 The United States and Egypt have had a longstanding, relationship filled with several events over the last several decades. Relations between the US and Egypt have been grounded in a mutual commitment to promoting peace, safety, stability and prosperity throughout the Middle East. However, what do the relations between these two countries look like over the last twenty years?

In any analysis regarding the United States and Egypt, it is vastly important to start with a pivotal alliance that started in 1990. On August 2, 1990, Iraq invaded Kuwait, and within mere hours had occupied almost all strategic positions within the entire country. One week later, President George H.W. Bush ordered the organization of Operation Desert Shield. The order prepared American troops to become part of an international coalition in the war against Iraq. Throughout this process, Egypt joined the US-led forces. This was a vital piece of the United States and Egypt relations because following the Gulf War, Egypt emerged as the main US ally in the Middle East and also as one of the biggest peace keepers in the region.

Since the early 90’s, the United States and Egypt have continued to remain a strong alliance. Jumping to almost a decade later, history seems to repeat itself under a new President Bush. The United States forces invaded Iraq. Egypt has benefitted strongly from having a military alliance with the United States. Following the peace treaty with Israel, between 1979 and 2003, Egypt acquired approximately $19 billion in military aid. This put Egypt as the second largest non-NATO recipient of United States military aid after Israel. Also, Egypt received approximately $30 billion in economic aid during this same time frame. However, after 9/11, United States relations with Egypt were somewhat strained. As the Bush Administration began to pressure Egypt as well as other regional allies to make political reforms under the “Freedom Agenda,” tensions strengthened. These demands were not supported by Mubarak’s regime. In turn, Egypt refused to send troops to Afghanistan or Iraq in 2001 and 2003.

In 2008, members of the United States Congress began to discuss the option of eliminating some aid to Egypt as a result of religious freedoms, women’s rights, and human rights violations which are contrary to American values. However, under Mubarak’s rule, Egypt remained a close ally to the United States for strategic and counterterrorism purposes. However, during the 2011 Egyptian revolution top United States government leaders urged Hosni Mubarak and his government to make some changes. Essentially, to stop using violence and to respect the rights of protesters such as the right to peaceful assembly and association. Ties between the two countries became even more strained when Egyptian police and soldiers raided seventeen offices of foreign and local NGOs including the National Democratic Institution (NDI), Freedom House and the German Konrad-Adenaur Foundation, and the International Republican Institute (IRI) on December 29, 2011 because of allegations of illegal funding from abroad. The United States immediately condemned the raids as an attack on American values and threatened to stop military and economic aid, but this threat was dismissed by the Egyptian government. This was a big bump in the road for the two countries relationship.

In November 2012, President Barack Obama, for the first time since Egypt signed the peace treaty with Israel, declared that the United States does not consider Egypt’s Islamist-led government an enemy or an ally. In fact, many in Egypt and throughout Arab fault the Obama White House for its support of the Arab Springs uprisings that began in 2010 in Tunisia and later throughout Libya, Yemen, Egypt, Syria, and Bahrain. Many even view his support for the uprising in Egypt as part of a United States conspiracy to weaken Arab states and push them into civil strife, in turn benefiting Israel. In many ways, Obama is still vilified in Egypt.

However, across and through these moments in the United States and Egyptian relationship, the partnership still remains strong. Over the decades, the economic partnership between the two countries has sustained many political turns and road bumps. But today, the two countries enjoy a great trade relationship, with over $6 billion dollars going both ways in 2018. According to Dr. Sahar Nasr, Egypt’s Minister for Investment and International Cooperation, during the 2017 and 2018 fiscal year, investments in Egypt totaled $21.8 billion

Today, the United States and Egypt partnership is not only crucial to the stability of Middle East and North America, but also as a fundamental defense global terrorism and extreme violence. Each country is grounded and bonded through a common understanding in striving to further solutions to problems in the Middle East. Egypt has long been and remains one of the United States most influential and reliable allies. Egypt’s leadership and general population is incredibly educated and skilled and its strategic location within the Middle East, and these attributes help advance a broader mutual interest with the United States in the Middle East. The Egypt and United States relationship is a strong and meaningful alliance that is bonded through a mutual interest in world affairs that extend far beyond the two countries boundaries.