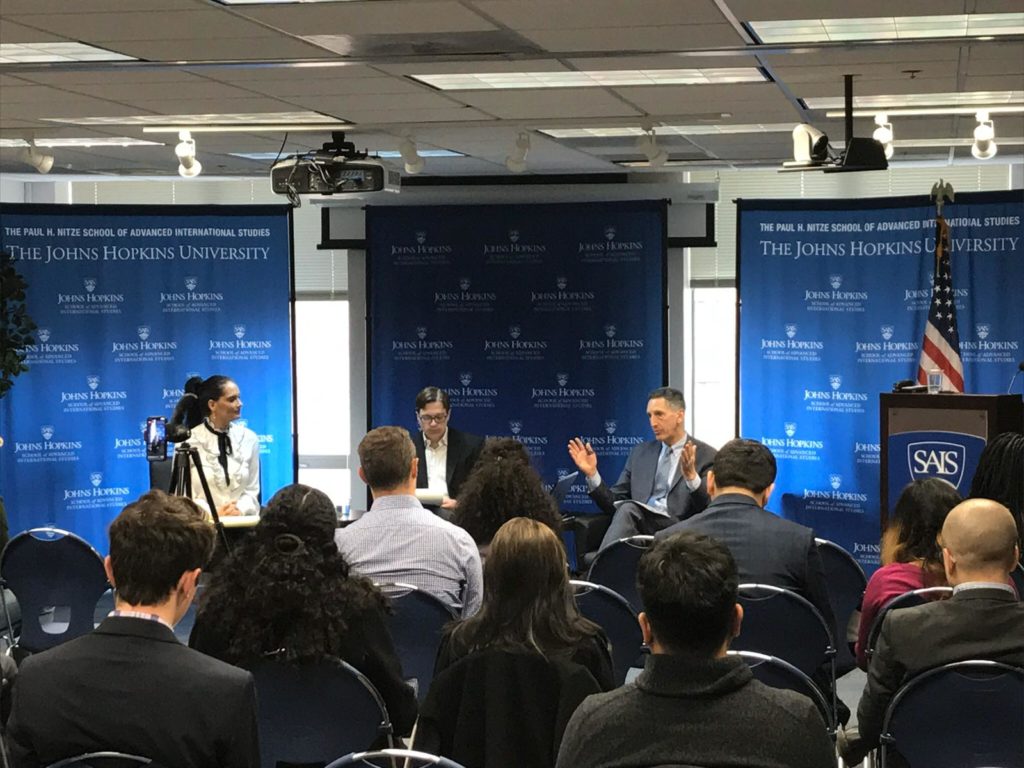 The discussion revolved around terrorism in the Middle East with special focus on GCC in light of the Yemen conflict and the rise of state-sponsored terrorism.

The event was moderated by former Ambassador-at-Large for Weapons of Mass Destruction, Bonnie Jenkins, and the discussion was led by foreign policy experts: Bassima Alghussein, Edward P. Joseph, and Dr. Jeffrey Stacey.

Bassima Alghussein focused on framing the discussion by raising three concerns: 1) While the U.S. sells about $8 billion dollars worth of weapons to Saudi Arabia and the United Arab Emirates some are being sold to U.S. enemies including al-Qaeda and other nefarious groups in Yemen, according to a CNN investigative report; 2) many of these weapons are being used to commit human rights violations; and 3) discussed how this exchange interplays into the broader regional dynamics in the Middle East, specifically in relation to Iran and their shifting incentives to obtain nuclear capabilities.

Edward P. Joseph focused on Libya’s role in this topic, but also included other players in the region including Egypt, Bahrain, and Turkey.  He also asserted that this topic can not be reduced to one side versus the other.  Both internal and external actors are at play in this issue along with their distinct special interests.

Jeff Stacey focused on Iran’s role in this topic calling Soleimani’s death “unwise, but not unjustified.”  He also classified the situation with Iran as the, “crisis that keeps on giving.”  Stacey further explored the nuclear deal, Iran elections, protests, Russia, and the upcoming U.S. elections to segue into the impacts on U.S. national security interests in the region.

The discussion of these topics was followed by a question and answer segment engaged by students from SAIS, American University, and foreign policy professionals around the Washington D.C. area among others.

The New York Center for Foreign Policy Affairs will be holding a briefing on Capitol Hill on Monday, February 10, 2020 from 2:30pm – 4:00pm.