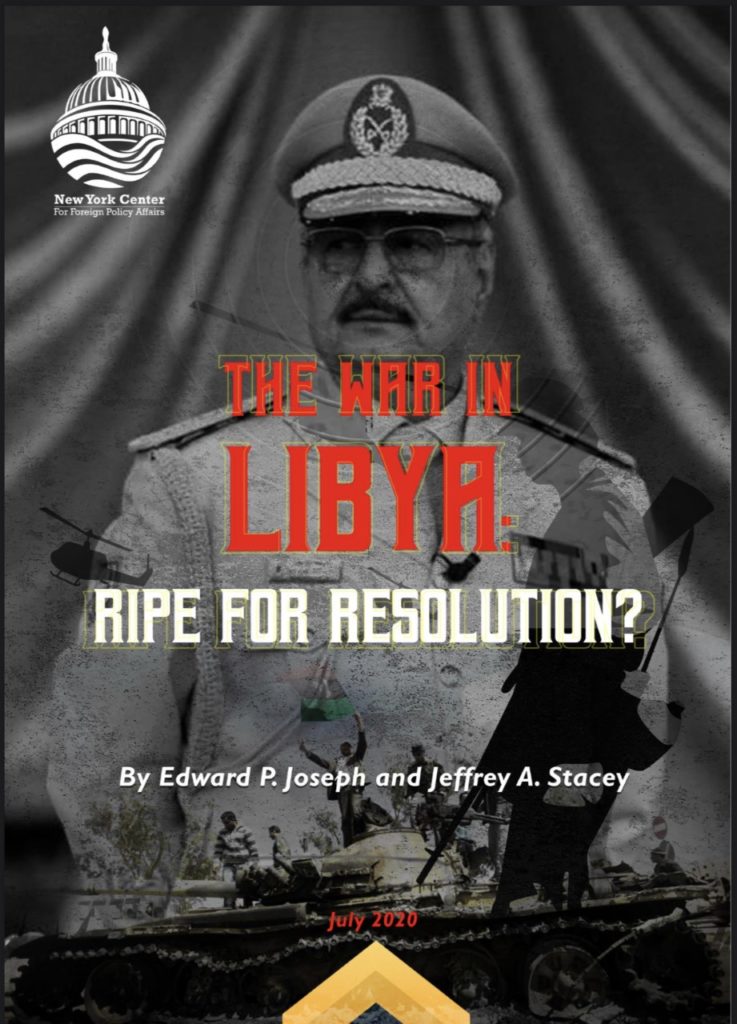 The New York Center for Foreign Policy Affairs (NYCFPA) has issued a major report on the conflict in Libya following pivotal events in recent weeks.  The conflict that has been developing over the last decade has become increasingly complicated due to the national interests of surrounding countries becoming a proxy war with mass violations of human rights. What started as a civil war exposing the vacuum of power left by the death of Muammar Mohammed Abu Minyar Gaddafi, has been exacerbated by the assault of Libyan National Army (LNA) leader, Khalifa Haftar, who has been complicit in indiscriminate violations of human rights, and enlisted the services of foreign mercenaries, namely, Russian mercenaries, to substantiate a seemingly never-ending war.

Despite UN Secretary General Guterres’s global appeal for a cessation of violence during Covid-19 conditions—and the initial positive response from Libya’s chief combatant General Khalifa Haftar—intense fighting continues. Libya remains in the grips of a multi-faceted conflict that has brought regional, religious, tribal, personal and financial differences to the fore, as well as external intervention on both sides of the conflict. Nearly ten foreign countries have stakes in the present-day Libyan civil war dating back to 2014, with the country’s collapse beginning even prior to that.

Most of the militias who rushed to the aide of Tripoli are paid – one of the major problems with security in Libya – but money was not the only motive that drew them into defense of Tripoli as Haftar launched and maintained his assault. Child mercenaries, like migrants of all ages, could well be among the fighting forces of both sides. With no international monitoring, the solution to their plight, to the extent reports are accurate, is to end the fighting as soon as possible, while bringing pressure on the parties to ensure they are not using child soldiers.

The LNA’s overextended supply lines are threatened. Haftar’s position has weakened to a point that his authority has been openly challenged in his Eastern bastion by Parliament leader Aguilah Saleh. Saleh’s peace-reform proposal forced the embarrassed Haftar into effectively declaring himself Libya’s dictator – as his LNA forces have been rolled back and exposed.

Principal Director of the New York Center for Foreign Policy Affairs, Justin Russell states, “A solution to the conflict in Libya continues to elude global leaders. This conflict has created a human rights situation that could potentially be irreversible without the establishment of solid, focused policy by the United States Government.  Moreover, the Center expresses concern over the rivalries playing out at the expense of the Libyan people as a result of outside Middle Eastern and European involvement.  Namely, the United Arab Emirates and their funding of the Haftar offensive with the help of France; and Italy and Turkey in their support of Tripoli.”

Russell adds, “Our team continues to monitor and assess the ongoing situation in Libya, and frankly, believes the US needs to play a strategically pivotal role in helping to bring an end to this human rights crisis. The US must stand firm in their support for the GNA, demand the end of armed conflict and the establishment of an inclusive government that represents all Libyans.  It is our position that establishing a coalition government that represents all people is essential to stabilizing this critical region of North Africa.”

The New York Center for Foreign Policy Affairs seeks to promote the ability of Libyans to maintain a unified and inclusive government that can both secure the country and meet the economic and humanitarian needs of the Libyan people. More specifically, to bring more attention to the mass atrocities to human rights violations.  We encourage U.S. leaders to provide targeted assistance to build Libyan institutions, promote political reconciliation, and increase Libya’s capacity to govern effectively by holding free and fair elections, secure Libya’s territory, and manage public finances transparently and responsibly. NYCFPA calls for the U.S. to work more directly with all parties involved in this conflict, including those women and marginalized communities, in their efforts to improve Libyan lives.

Finally, we urge the U.S. government to make ending the crisis in Libya a top foreign policy priority in order to bring economic development, security, and democracy to the people of Libya.