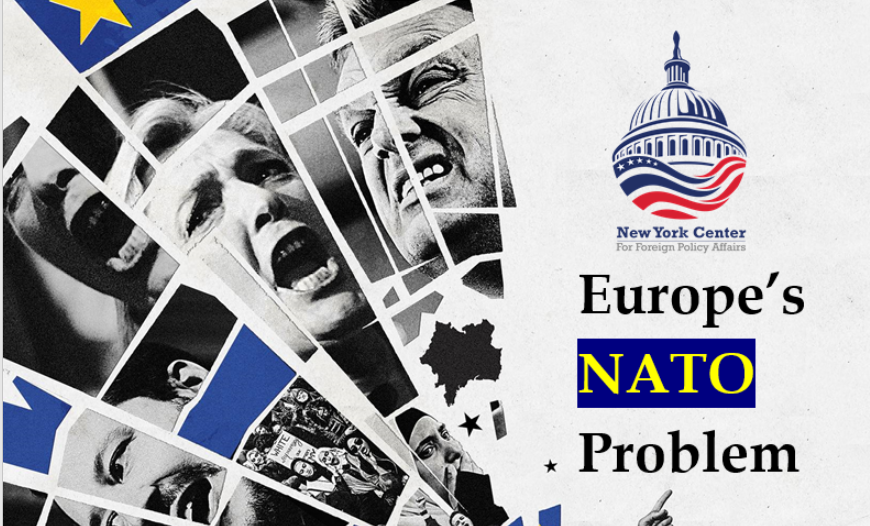 A report published by New York Center For Foreign Policy Affairs (NYCFPA) focused on the North Atlantic Treaty Organization, (NATO) also called the North Atlantic Alliance, a large European intergovernmental military alliance comprised of 29 North American and European countries. The report focused on the current conditions of the NATO and lack of advancement in the organisation and international threats facing the organisation. The report which provided a review of the NATO’s challenges concluded that Russia, lack of spending and broken (divided EU) are key problems that affect the organisation.

The repport argued that although the cold war era is gone, the relations between Moscow and NATO has remained tense and volatile. With both sides actively employing the blame game tactics, and employing sympathetic media outlets to churn out stories in a bid to help spread their messages.

The report concluded that NATO has key problems such as:

With no viable alternative to the exiting alliance between NATO member states, it remains for each ally to take the security of its territory more seriously. And while one may choose to apply the classic economic approach to the equation, it may generally be unwise to spend more on transportation infrastructure or health services while ignoring security.

The wake of strained relations between NATO and the U.S. has brought increased worries to NATO allies, as one cannot be too careful even in a bid to sever ties with the U.S. for fear of exposing its weakness to rivals like the Russians.

While the European countries have put a lot of effort in developing policy as well as projects including the Permanent Structured Cooperation (PESCO) which has proposed the sum of $13 billion for spending on European defence, the notion that the EU could ever do without the United States with regards to protection may be largely misleading.

Tump is seen by many European countries as a threat to NATO. Although, Trump’s constant criticism of the organisation stems from the fact that America contributes the most in the budget of the organisation; meanwhile NATO is meant to protect Europeans more than the Americans. The report added, “According to the president, NATO was done with its core missions given the end of the cold war, and in this insinuation, neglect the constant threat of Russian led campaigns in countries of member nations including Estonia, Latvia, Lithuania and Poland. The issue of European defence spending has also been a contending issue in the deepening crisis currently befalling the alliance, and President Trump is of the view that allies have been taking advantage of the U.S. And while it is true that a lot remains to be done, it may be wise to appreciate the fact that spending by NATO allies has greatly increased from what it used to be.”

The report added that “For an alliance that has done so much in safeguarding the continent from the cold war even onto post-cold war era, NATO certainly has its own challenges and problems. And one ironic fact in the entire NATO paradox, is that which assumes that the main problem of the organization is itself. Apart from President Trump’s badgering regarding the need for member states to spend more on security, opposition is rife in other quarters regarding a review of a frame work which allows Washington call the shots, and in so doing, makes certain its interests come first.”

The report added that, Ultimately, NATO was forced to put an end to all formal cooperation with Moscow on April 1, 2014 in response to the latter’s military intervention and aggressive actions in Ukraine, as well as what has been termed the illegal occupation and consequent annexation of Crimea. Notwithstanding, channels of both military and political communications between both parties have remained open, and there is the hope of reaching a compromise someday.

It also reaffirmed that. “Given the Russian support for the highly unpopular Syrian regime, its provocative military activities around NATO’s borders and a host of other activities which have constantly undermined NATO, the alliance through the North Atlantic Council made a statement giving to its support to the decision of the United States to renege on agreements and therefore halt all commitments as it pertained to the Intermediate-Range Nuclear Forces (INF) Treaty in response of Russia’s material breach of the same. Given the grievances towards the continued violation of international law and treaties by the Russians, NATO has therefore responded to this renewed threat by activating both deterrence and defence mechanisms whilst remaining open to dialogue.”

It also argued that major challenges facing the union are perceived to have more to do with the political and financial will of member states rather than logistics. Also, considering that the EU forces alone, if amassed would almost see the formation of an army, the magnitude of which is surpassed by China alone, this would greatly improve the capabilities of the EU to defend itself.

“Over the years, the activities of the alliance have continued to elicit different reactions among member states and the world at large. And others even think it’s time to finally lay the alliance to rest and leave the rest to war-time historians. In retrospect, others are of the opinion that the European Union and its surrounding countries are even less prepared than ever in their bid to protect the region. Hence, they remain in favour of an alliance that will ensure security of its democracy, territory and economy, even though there is no opposing the need to encourage a home-grown effort in the same regard.” Said the report