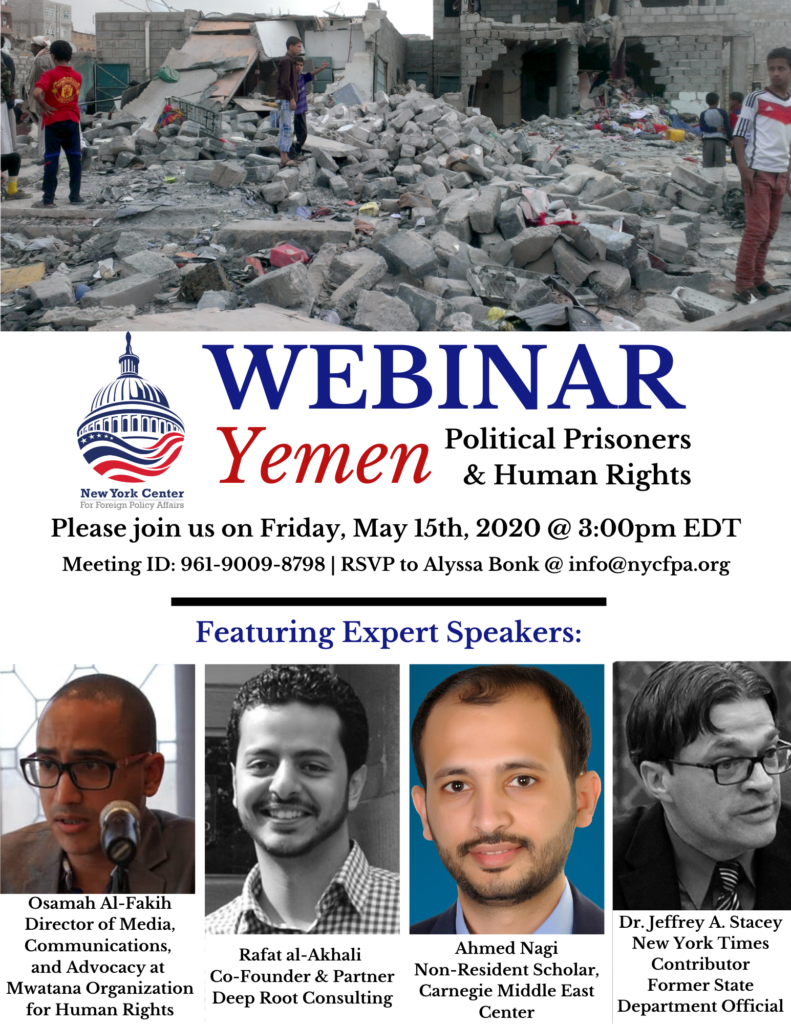 Please join us for an expert panel on the state of Yemeni political prisoners and human rights in light of COVID-19.

Osamah Al-Fakih is the Director of Media, Communications, and Advocacy at Mwatana Organization for Human Rights (Mwatana). At Columbia Law School he is HRI’s Practitioner-in-Residence and recipient of its Global Advocate Award. Al-Fakih’s research and advocacy has focused on defending human rights against mounting violations by all sides in the current conflict in Yemen. Before assuming his current role at Mwatana, an independent Yemeni organization aimed at protecting human rights, Al-Fakih directed its research unit, leading field investigations into human rights abuses in Yemen. He continues his research work at HRI, writing about the Yemeni crisis, briefing officials and diplomats about the situation in Yemen, meeting key partners to support his advocacy work, and teaching and working with students at the Law School’s Human Rights Clinic.

Rafat Ali Al-Akhali was appointed in November 2014 as Minister of Youth and Sports in the Government of Yemen, a post he held until September 2015. Rafat led the planning and implementation of key reforms in Yemen including fuel subsidies, power sector, and civil service reforms. He has also worked in the field of development with a number of international development agencies in Yemen, and was a member of the Accessions Division at the World Trade Organization (WTO) in Geneva where he participated in the accession process of several countries including Yemen. Rafat earned his second Master degree in Public Policy (MPP) at the Blavatnik School of Government, University of Oxford, UK. His first Master degree was in Business Administration (MBA) from Ecole des Hautes Etudes Commerciales (HEC) Montréal, Canada. Rafat is a non-resident fellow at the Rafik Hariri Center for the Middle East at the Atlantic Council, and was selected as a Young Global Leader by the World Economic Forum in 2015.

Ahmed Nagi is a nonresident scholar at the Carnegie Middle East Center in Beirut, where his research centers on Yemen. Nagi is also research manager at the Institute of Citizenship and Diversity Management at Adyan Foundation, Lebanon, and a country coordinator on Yemen at Varieties of Democracy Institute (V-Dem), Sweden. He is also a co-founder of Insight Source Center for Research and Consulting, Yemen. Nagi holds a Master’s degree in public governance from the University of Granada, Spain. His research focuses on religious and tribal identities, citizenship, state building, civil society, conflict dynamics, and Yemen’s relations with its neighboring countries.

Dr. Jeffrey A. Stacey is a national security and global development consultant, and contributor to the New York Times. He is a former State Department official and Senior Adviser to the Coordinator for Reconstruction and Stabilization, Senior Fellow at the Center for Transatlantic Relations, Professor of Political Science and International Relations at George Washington and Tulane Universities, Chief of Staff at the European Parliament, and Speech Writer in the British House of Commons. His consulting clients have included the United Nations, the U.S. Defense Department, the State Department, NATO, the Asian Development Bank, the European Union, and multiple individual governments (most recently Afghanistan, UAE, Tajikistan, Somalia, and Pakistan) as well as various think tanks, business firms, and consultancies. He received his Ph.D. from Columbia University, MPhil from Oxford University, and Honors BA from the University of Michigan.