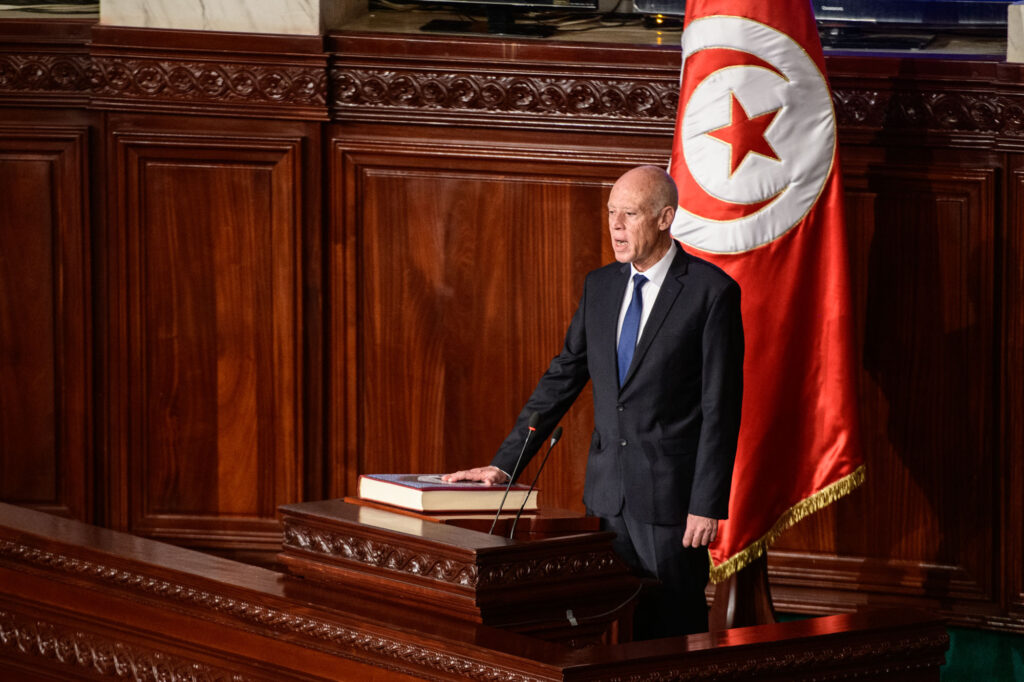 Nothing about President Kais Saied’s decision to dissolve Tunisia’s parliament on March 30 was unexpected. Since his coup last summer, he has already changed the Supreme Judicial Council, shut down the anti-corruption commission, and utilized a variety of exceptional procedures to make mass arrests and intimidate his adversaries. He replied to the first direct challenge to his power grab, when Tunisians MPs reassembled for the first time since he suspended parliament and voted to oppose the emergency powers he had granted himself last year, by abolishing the legislature completely.

Under Tunisia’s dangerously broad anti-terrorism statute, those MPs who resisted Saied’s regime and met virtually may now face accusations of “creating a criminal organization” to “endanger the state and sow instability,” which could result in a 20-year prison sentence or possibly the death penalty. It is another another indication that, despite the opposition of some Tunisian judges, the court has become basically Saied’s personal domain. His security services are likewise close to him and execute his bidding.

However, other forces that were meant to protect Tunisia’s democracy are increasingly siding with Saied as well. When its tanks shut down parliament and when it accepted Saied’s buildup of near-absolute authority, ending in parliament’s dissolution, the military that promised to preserve the constitution actually helped him sideline it. While military tribunals arrest and punish Saied’s opponents, the army has emphasized to foreign observers that it is neutral. Most importantly, the military continues to acknowledge Saied’s authority even as he breaches the constitution by ruling by decree and undermining the democracy it enshrines. The tyrant, who claimed he was dissolving parliament “to defend the government, the institution, and the Tunisian people,” continues to split the country, which the military is entrusted with keeping together.

The military is not the only one involved in this expanding cooperation. Many Western countries have displayed extraordinary indifference in the face of Saied’s methodical destruction of Tunisia’s democracy. Some governments have chosen to amuse Saied, allowing him to solidify his authority as society and the state crumble under the weight of a perfect storm of economic, political, and social crisis. The world cannot claim to be distracted; nations like as France have been supporting Saied even before Russia’s invasion of Ukraine drew global attention. The US, for its part, has studiously avoided referring to his move as a “coup,” because doing so would legally result in the suspension of US financial aid to Tunisia. As we observe the atrocities of Bucha and Mariupol, one can’t help but wonder what would have occurred if Western nations had responded more aggressively to Russia’s authoritarian trend and its consequences from Syria to Libya sooner. Unfortunately, we will have to deal with the implications of such normalization with authoritarianism as they emerge.

For Tunisia, this means enduring the atrocities that come with every authoritarian state and tyrant, which have been exacerbated by the conflict in Ukraine. It is apparent that upheaval and instability are on the horizon. Tunisians are already feeling the effects of Vladimir Putin’s war, with bread lines rising, rationing increasing, and petrol prices skyrocketing. Tunisia is particularly susceptible in an area that is heavily reliant on food imports from Russia and Ukraine; over the last five years, these two nations accounted for 56% of all wheat imports. But things will become worse since there is no accountability or check on Saied’s or his inner circle’s authority.

Corruption is likely to increase, further destabilizing the economy. As Saied’s new promotions in the security services are more inclined to look away at such transgressions in exchange for devotion to them and Saied’s new order, police and security officers will find it increasingly difficult to resist bribes. Because of the shortages and Saied’s campaign against anybody, including journalists and judges, who would reveal such crimes, kickbacks from overseas contracts and profiting from wheat and other imports may become prevalent.

Saied has sanctioned a culture of impunity as an insurgency commander who does not trust the authorities. Thugs carry out his orders, as brutal treatment of MPs and elected officials such as former Justice Minister and Ennahda deputy Noureddine Bhiri has become the standard. Journalists such as Chahrazed Akacha are being persecuted as press freedom dwindles.

If Western nations do not take a position against Tunisia’s democratic deconstruction, they must brace themselves for the unavoidable repercussions. Saied’s ruthlessness is escalating, and he prefers power over stability, dividing Tunisia into “traitors” and his supporters. There have yet to be any fines placed on him and his inner circle of ministers and family members, much alone merely identifying and humiliating them, while the rule of law in Tunisia is reduced to whether or not you’re in the president’s good graces.

Tunisia severely needs assistance as the conflict in Ukraine wreaks havoc on the country’s economy, causing food and energy costs to skyrocket, exacerbating long-standing economic issues. But, given the culture of impunity and total absence of accountability, can Saied and his ilk be trusted to address the situation or deliver any such aid? Tunisia faces a bleak future under Saied’s leadership. Accepting everything he is doing—the illegal power grab and effective suspension of the constitution; the dissolution of parliament; the takeover of the judiciary; the revival of a police state; the demonization of anyone who disagrees—will only legitimize the hell that comes with so much unchecked power.

History has shown that, at some point, either Saied will turn on the current crop of insiders he has elevated around him, or they will turn on him, with the authoritarian logic of sacrificing everyone in the cause of retaining control while the government crumbles around them. But that should provide no solace to anybody, and it will not appease a despondent public; in either event, Tunisia loses its democracy and tyranny continues. Western democracies can’t claim they have nothing to do with what Tunisia has become if they continue to indulge Saied and ignore his atrocities.